The first cases of AIDS 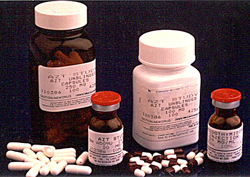 The New York Times was the first newspaper to report a new syndrome, seen in the homosexual communities of San Francisco and New York, on 3rd July 1981. Previously healthy men, some only in their 20s were suffering from rare diseases usually only seen in the elderly, such as the rare cancer: Kaposi’s sarcoma. At the time the investigation was considered to have “as much scientific as public health importance, because of what it may teach about determining the causes of more common types of cancer.”ANCHOR

It was noted that the patients had serious deficiencies in their immune systems, particularly T and B lymphocytes, but no cases had been seen outside of the homosexual community, and there was no clear evidence that the syndrome was contagious.1 In the second half of 1981, as cases began to emerge across different social groups, and it became apparent that the first few cases were not isolated incidents.ANCHOR, ANCHOR The disease was seen in heterosexuals, including a woman, and in IV drug users. The first incidence in the UK was reported in December 1981.ANCHOR

The new syndrome was named Acquired Immune deficiency syndrome (AIDS) by CDC (see related links) in 1982, and it became apparent that AIDS could be transmitted by blood transfusion. By 1983 it was clear that all social groups were at risk from the disease, leading to widespread panic as nothing was known about the new disease - even the method of transmission. A team at the Institute Pasteur in Paris, led by Luc Montagnier published their discovery of a virus they believed to be the cause of AIDS.ANCHOR The virus was a retrovirus called lymphadenopathy-associated virus (LAV). The scientific community were skeptical that the virus caused AIDS, since retroviruses were almost unheard of in humans. The only ones known were studied by Robert Gallo, who was researching the link  between AIDS and HTLV’s, a class of human retroviruses, at the National Cancer Institute in the USA.

The identification of a virus

In January 1984 research was published which linked a number of cases of AIDS, and suggested that the disease was sexually transmitted.ANCHOR A few months later CDC made a statement that they believed the virus responsible for the disease had been identified – the LAV virus.

A day later a controversial announcement was made by Robert Gallo’s team, that they had isolated the virus responsible for AIDS, and that it was HTLV-III. Despite the uncertainties, identification of the virus meant that a blood test for the AIDS virus could be developed, and vaccination was a possibility. Robert Gallo’s work was published in May.ANCHOR Shortly afterwards private companies began to apply for licenses to develop an AIDS test. A few months later Gallo’s team showed that HTLV-III could be transmitted to chimpanzees when they were injected with blood plasma from AIDS patients, giving the first animal model of the disease.ANCHOR By January 1985 it was clear from further research that LAV and HTLV-III were the same virus,ANCHOR allowing the FDA to license the first blood test for AIDS – an assay for antibodies to the LAV/HTLV-III virus. This finally allowed donor blood to be screened.

The search for a treament

Once it was known that AIDS was caused by a human retrovirus, the search for drug-treatments began. The viral enzyme reverse transcriptase, is used by retroviruses use to construct DNA from their viral RNA once they have infected a cell. Humans and other mammals do not make this enzyme, making it an obvious drug target. Reverse transcriptase remains a key target of anti-HIV therapies today. Gallo’s team had shown that a drug called Suramin, used to treat African trypanosomiasis, prevented animal retroviruses from using reverse transcriptase effectively in vitro, and reduced the spread of the virus in living animals. They found that Azido-thymidine, another anti-viral agent, prevented the virus from reproducing itself in a similar way, and since it was relatively non-toxic in rats and dogs, recommended that it should be investigated as a potential treatment for the LAV/HTLV-III virus.ANCHOR

In 1986 the virus was re-named Human Immunodeficiency virus (HIV) by the International Committee on the Taxonomy of Viruses, after the Institute Pasteur and the National Cancer Institute had been unable to reach agreement on the name.ANCHOR

By September early clinical tests showed that Azido-thymidine (AZT), which had been developed in the 1960s as an anti-cancer agent, but never licensed, slowed the progress of HIV in humans. Meanwhile AZT was shown to inhibit reverse transcriptase in a mouse retrovirus, and its precise mode of action could be studied in detail.ANCHOR Six months into the clinical trial one member of the group receiving AZT had died, compared to 19 deaths in the placebo group. The trial was halted so that AZT could be given to the placebo group, giving them a better chance of survival, and making AZT the first approved drug treatment for HIV and AIDS.ANCHOR