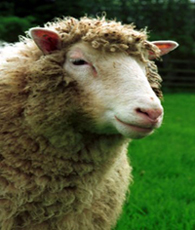 Dolly the sheep, as the first mammal to be cloned from an adult cell, is by far the world's most famous clone. However, cloning has existed in nature since the dawn of life. From asexual bacteria to ‘virgin births’ in aphids, clones are all around us and are fundamentally no different to other organisms. A clone has the same DNA sequence as its parent and so they are genetically identical.

Several clones had been produced in the lab before Dolly, including frogs, mice, and cows, which had all been cloned from the DNA from embryos. Dolly was remarkable in being the first mammal to be cloned from an adult cell. This was a major scientific achievement as it demonstrated that the DNA from adult cells, despite having specialised as one particular type of cell, can be used to create an entire organism.

How Dolly was cloned

Animal cloning from an adult cell is much more difficult than from an embryonic cell. So when scientists working at the Roslin Institute in Scotland produced Dolly, the only lamb born from 277 attempts, it was a major news story around the world.

To produce Dolly, scientists used an udder cell from a six-year-old Finn Dorset white sheep. They had to find a way to 'reprogram' the udder cells - to keep them  alive but stop them growing – which they achieved by altering the growth medium (the ‘soup’ in which the cells were kept alive). Then they injected the cell into an unfertilised egg cell which had had its nucleus removed, and made the cells fuse by using electrical pulses. The unfertilised egg cell came from a Scottish Blackface ewe. When the research team had managed to fuse the nucleus from the adult white sheep cell with the egg cell from the black-faced sheep, they needed to make sure that the resulting cell would develop into an embryo. They cultured it for six or seven days to see if it divided and developed normally, before implanting it into a surrogate mother, another Scottish Blackface ewe. Dolly had a white face.

From 277 cell fusions, 29 early embryos developed and were implanted into 13 surrogate mothers. But only one pregnancy went to full term, and the 6.6 kg Finn Dorset lamb 6LLS (alias Dolly) was born after 148 days.

What happened to Dolly? 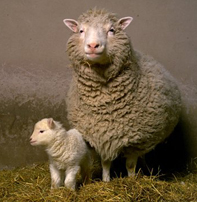 Dolly lived a pampered existence at the Roslin Institute. She mated and produced normal offspring in the normal way, showing that such cloned animals can reproduce. Born on 5 July 1996, she was euthanased on 14 February 2003, aged six and a half. Sheep can live to age 11 or 12, but Dolly suffered from arthritis in a hind leg joint and from sheep pulmonary adenomatosis, a virus-induced lung tumour that is common among sheep which are raised indoors.

The DNA in the nucleus is wrapped up into chromosomes, which shorten each time the cell replicates. This meant that Dolly’s chromosomes were a little shorter than those of other sheep her age and her early ageing may reflect that she was raised from the nucleus of a 6-year old sheep. Dolly was also not entirely identical to her genetic mother because the mitochondria, the power plants of the cell that are kept outside the nucleus, were inherited from Dolly’s egg donor mother.

Dolly the sheep was produced at the Roslin Institute as part of research into producing medicines in the milk of farm animals. Researchers have managed to transfer human genes that produce useful proteins into sheep and cows, so that they can produce, for instance, the blood clotting agent factor IX to treat haemophilia or alpha-1-antitrypsin to treat cystic fibrosis and other lung conditions. Inserting these genes into animals is a difficult and laborious process; cloning allows researchers to only do this once and clone the resulting transgenic animal to build up a breeding stock.

The development of cloning technology has led to new ways to produce medicines and is improving our understanding of development and genetics.

Since 1996, when Dolly was born, other sheep have been cloned from adult cells, as have cats, rabbits, horses and donkeys, pigs, goats and cattle. In 2004 a mouse was cloned using a nucleus from an olfactory neuron, showing that the donor nucleus can come from a tissue of the body that does not normally divide.

Improvements in the technique have meant that the cloning of animals is becoming cheaper and more reliable. This has created a market for commercial services offering to clone pets or elite breeding livestock, but still with a $100,000 price-tag.

The advances made through cloning animals have led to a potential new therapy to prevent mitochondrial diseases in humans being passed from mother to child. About 1 in 6000 people is born with faulty mitochondria, which can result in diseases like muscular dystrophy. To prevent this, genetic material from the embryo is extracted and placed in an egg cell donated by another woman, which contains functioning mitochondria. This is the same process as used in cloning of embryonic cells of animals. Without this intervention, the faulty mitochondria are certain to pass on to the next generation.

The treatment is currently not permitted for use in humans. However, the Human Fertilisation & Embryology Authority in the UK has reported that there is general support in the public for legalising the therapy and making it available to patients.