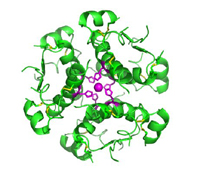 Diabetes has been known for thousands of years. Symptoms include raging thirst, rapid weight loss, tiredness and passing large quantities of sugary urine. Type I, or insulin dependant, diabetes is rapidly fatal unless treated by replacing the insulin which is lacking in the blood stream. The discovery, isolation and purification of insulin in the 1920s was a significant medical advance, preventing premature deaths in many sufferers.

The history of diabetes

There was research into diabetes as early as the 18th Century. In 1788 by Thomas Cawley observedANCHOR, that the pancreas was damaged in patients who had died from diabeates. However, at this time there was no way of telling whether this was cause or effect: he could equally well have noted changes in the kidney, eye, blood vessels or nerves of such patients. None of these is the cause of diabetes: they are all effects of the disease.

In 1889 Joseph von Mering and Oskar MinkowskiANCHOR showed that removing the pancreas from the dog produced diabetes. This was the first demonstration that there was an anti-diabetic factor produced by the pancreas which enabled the body to use sugars in the blood properly. This factor was named insulin by Schafer in 1915, some years before it was actually identified or isolated.

Following von Mering and Minkowski's discovery, there were several unsuccessful attempts to isolate insulin. One of the most important was by Georg ZülzerANCHOR, who used alcohol rather than water to extract insulin and was able to obtain active preparations. In 1909 Forschbach used dogs whose pancreas had been removed as a model for diabetes, showing that one of these extracts could reduce their blood sugar by 90%. Unfortunately, impurities in the extract meant this preparation of insulin also raised the animal's temperature. There were attempts to produce purer extracts, and two diabetic patients were treated in these trials, but there were similar toxic effects, so the use of such extracts did not continue.

Working in Toronto, the surgeon Frederick Banting and medical student Charles Best began their attempts to produce insulin in 1921. By the end of that year, they had shown in classic experiments that pancreatic extracts reduced blood sugar, removing sugar from the urine of dogs whose pancreas had been removed.ANCHOR However, these extracts, once again, produced an unacceptable fever when injected into diabetic patients.

When biochemist, James Collip, joined the Toronto team he soon prepared insulin from beef pancreas which was pure enough to treat diabetic patients.ANCHOR He did this using an alcohol extraction technique to produce solutions containing different proteins. To find whether insulin was present in each solution, and in what amount, he measured its activity, monitoring blood sugar levels of rabbits following injection of each solution. Collip developed a measure of activity based on the ability of the extract to lower blood sugar in the rabbit. This was used to standardise extracts,ANCHOR an essential step as insulin overdose can be fatal.

Collip's extracts were used successfully in dogs and then in patients in 1922 with dramatic results. The paper was described by the British Medical JournalANCHOR as a "magnificent contribution to the treatment of diabetes".