Prophylaxis is the term used to describe medicinal attempts to prevent, rather than treat or cure a disease. 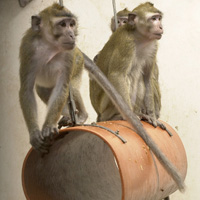 Since the early days of the HIV pandemic, as soon as it was clear that an effective HIV vaccine would still be years away, there has been considerable interest in using anti-HIV drugs to reduce the risk of infection following exposure to HIV (so-called prophylaxis). Animal models of HIV infection, especially the rhesus macaque, have played a major role in developing and testing these treatments.

The development of HIV drugs to treat HIV-infected persons has shown that many compounds that are effective in vitro (i.e., in tissue culture assays) fail to hold their promise when tested in humans, because of unfavorable pharmacokinetics, toxicity or insufficient antiviral efficacy. The same principles apply to the development of drugs to prevent HIV infection. The outcome of drug administration is determined by many complex interactions in vivo between the virus, the antiviral drug(s) and the host; with current knowledge, these interactions cannot be mimicked and predicted sufficiently by in vitro studies or computer models.

Testing different compounds in human clinical trials is logistically difficult, time-consuming and expensive, so only a very limited number of candidates can be explored in a given time. Fortunately, the development of antiviral strategies can be accelerated by efficient and predictive animal models capable of screening and selecting the most promising compounds. No animal model is perfect and each model has its limitations, but the simian immunodeficiency virus (SIV) of macaques is currently considered the best animal model for HIV infection because of the many similarities of the host, the virus and the disease. Non-human primates are phylogenetically the closest to humans, and have similar immunology and physiology (including drug metabolism, placenta formation, fetal and infant development). In addition, SIV, a virus closely related to HIV-1, can infect macaques and causes a disease that resembles HIV infection and AIDS in humans, and the same markers are used to monitor the disease course. For these reasons, SIV infection of macaques has become an important animal model to test antiviral drugs to prevent or treat infection.

Different nonhuman primate models have been developed based on the selection of the macaque species, the particular SIV strain and the inoculation route (e.g. IV injection, vaginal exposure) usedANCHOR. These models have been improved and refined during the past two decades. For example, SIV-HIV chimeric viruses have been engineered to contain portions of HIV-1, such as the enzyme reverse transcriptase (“RT-SHIV”) that the virus requires in order to multiply or the envelope protein (“env-SHIV”) that the virus needs if it is to escape from a cell and infect other cells, to allow these models to also test drugs that are specific for HIV-1 reverse transcriptase or envelopeANCHOR .ANCHOR

Many studies in non-human primates have investigated whether the administration of anti-HIV drugs prior to or just after exposure to virus can prevent infection. The earliest studies indicated that drugs such as the reverse transcriptase inhibitor zidovudine (AZT), the first approved drug treatment for HIV, were not very effective in preventing infection, but a likely reason for this was the combination of a high-dose viral inoculums used, the direct intravenous route of virus inoculation, and the relative weak potency of drugs at that timeANCHOR ANCHOR ANCHOR ANCHOR ANCHORThe proof-of-concept that HIV drugs can prevent infection was demonstrated in 1992 when a 6-weeks zidovudine regimen, started 2 hours before an intravenous low-dose virus inoculation that more accurately represented HIV infection in humans, protected infant macaques against infectionANCHOR. These results were predictive of a subsequent clinical trial (Pediatric AIDS Clinical Trials Group Protocol 076), which demonstrated that zidovudine administration to HIV-infected pregnant women beginning at 14 to 34 weeks of gestation, and continuing to their newborns during the first 6 weeks of life reduced the rate of viral transmission by two-thirdsANCHOR.

Since then, a growing number of studies have been performed in macaques to identify more effective and simpler prophylactic drug regimens. These studies generally used lower virus doses, sometimes combined with a mucosal route of virus inoculation that mimics vaginal or anal exposure responsible for the majority of human HIV infections. These studies demonstrated that administration of some newer anti-HIV drugs, including the reverse transcriptase inhibitors adefovir (PMEA), tenofovir (PMPA), and emtricitabine (FTC) that prevent the virus from multiplying in the infected cell, and the CCR5 inhibitor CMPD167 that stops the virus from binding the CCR5 receptor on the cell surface and entering a cell in the first place, starting prior to, or at the time of virus inoculation, was able to prevent infection, though with varying success ratesANCHOR ANCHOR ANCHOR ANCHOR ANCHOR, ANCHOR ANCHOR ANCHOR. Only very few compounds such as the reverse transcriptase inhibitors tenofovir, BEA-005 and GW420867, and the CCR5 inhibitor CMPD167, were able to reduce infection rates when treatment was started after virus inoculation. For those drugs that were successful in post-exposure prophylaxis studies, a combination of the timing and duration of drug administration was found to determine the success rate, because a delay in the start, a shorter duration, or interruption of the treatment regimen all reduced the prophylactic efficacyANCHOR ANCHOR ANCHOR ANCHOR ANCHOR ANCHOR ANCHOR information that has guided the design of subsequent clinical trials.

While some of the compounds such as GW420867 that showed prophylactic efficacy in the macaque model are no longer in clinical development (e.g., due to toxicity or pharmacokinetic problems discovered later in pre-clinical testing), the very promising results achieved with tenofovir have sparked further studies aimed at simplifying the prophylactic regimen. Several studies in infant and adult macaques have demonstrated that short or intermittent regimens of tenofovir (with or without coadministration of emtricitabine) consisting of one dose before and one dose after each virus inoculation were highly effective in reducing SIV infection ratesANCHOR ANCHOR ANCHOR.

The demonstration at the beginning of the 1990’s that anti-HIV drugs can prevent infection in macaques has provided the rationale to administer these compounds to humans to reduce the likelihood of infection in several clinical settings. Antiviral drugs are now recommended, usually as a combination of several drugs, to reduce the risk of HIV infection after occupational exposure (e.g., needle-stick accidents of health care workers) and non-occupational exposure (e.g. sex or injection-drug use)ANCHOR ANCHOR. As mentioned previously, drug regimens containing zidovudine and more recently also more potent drugs such as nevirapine have proven to be highly effective in reducing the rate of mother-to-infant transmission of HIV, including in developing countriesANCHOR ANCHOR ANCHOR and save many thousands of lives every year . Because the short nevirapine regimen that is given to pregnant HIV-infected women at the onset of labor frequently induces drug resistance mutations in the mother that may compromise future treatmentANCHOR, tenofovir’s high prophylactic success in the infant macaque model has sparked clinical trials in which a short tenofovir-containing regimen was added to existing perinatal drug regimens to reduce the occurrence of resistance mutations and / or further lower the transmission rate ANCHOR ANCHOR ANCHOR ANCHOR ANCHOR.

Because an efficacious HIV vaccine has so far not been identified, the concept of using pre-exposure prophylaxis also as a possible HIV prevention strategy in adults has gained rapid momentum in recent years.  The promising prophylactic data of tenofovir (with or without emtricitabine) in the macaque model, combined with the favorable pharmacokinetics, safety profile, drug resistance pattern and therapeutic efficacy of these drugs in HIV-infected people, have pushed these compounds into front-runner position in ongoing clinical trials that investigate whether uninfected adults who engage in high-risk behavior will have a lower infection rate by taking a once daily tablet of tenofovir or tenofovir plus emtricitabine. The results of these ongoing trials are highly anticipated. An overview of the design, status and challenges of these trials which are currently underway at several international sites and target different high-risk populations can be found on the website of the AIDS Vaccine Advicacy CoalitionANCHOR ANCHOR.

In conclusion, nonhuman primate models of HIV infection have played an important role in guiding the development of pre- and post-exposure prophylaxis strategies. Ongoing comparison of results obtained in these models with those observed in human studies will allow further validation and refinement of these animal models so they can continue to provide a solid foundation to advance our scientific knowledge and to guide clinical trials