Stroke is the second-leading cause of death and the main cause of brain damage worldwideANCHOR. A stroke occurs when the blood supply to a part of the brain is suddenly interrupted, usually through narrowing of a blood vessel due to build-up of fatty deposits on the vessel wall or blockage of the vessel by a blood clot. Low blood flow means that brain cells are starved of oxygen and the nutrients needed for survival, leading to brain cell death and nerve damageANCHOR.

At the moment there is only one type of immediate treatment available to a limited number of stroke patients. The clot-busting treatment is called thrombolysis and works by dissolving the clot blocking the affected vessel, allowing blood flow to return. This is done by administering a protein called tissue plasminogen activator (tPA). Much of the initial testing was conducted on rabbits and showed that it could restore blood flow completely within an hour of treatment and reduce brain cell death by 75%ANCHOR.. However, it can only be given to stroke patients who are suitable and who are seen at hospital within three hours of their strokeANCHOR., and there is an urgent need to develop better treatments. Development of such treatments depends on a thorough understanding of the processes that cause brain cells to die after stroke. 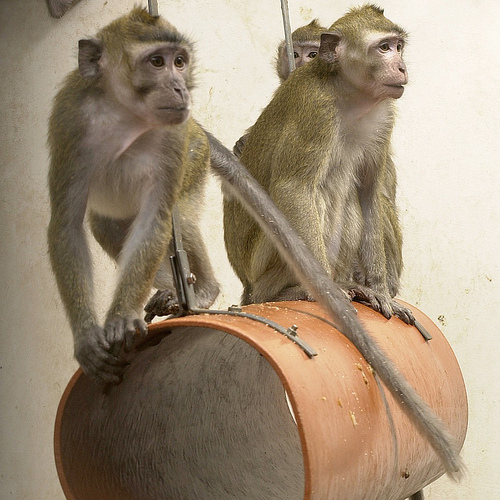 The brain damage caused by a stroke can result in loss of function, which requires extensive rehabilitation to restore. Research on monkeys nearly 100 years ago revealed the extent that the brain can compensate for this damageANCHOR.. Monkeys which had reduced limb function on one side following an induced stroke were restricted to only use their weaker arm. Within two weeks they were able to use their weaker arm, while monkeys without this intervention could not, even after six months. This technique is now known as constraint-induced movement therapy and is used in stroke patients today. Studies on these patients have since shown that the brain undergoes changes in function and structure following this therapyANCHOR..

Stroke is complicated because it involves multiple interactions between different organ systems including the blood vessels and brainANCHOR.. This complexity means that it is impossible to recreate stroke in cell culture systems. Thus animals including rodents and monkeys that mimic many aspects of human stroke have been crucial to understanding what happens in brain injuryANCHOR.. Rodent models of stroke are most often used and commonly involve the occlusion (restriction) of the middle cerebral artery (MCA), a major brain vessel and the most commonly affected artery in patientsANCHOR ANCHOR.. Animals have been the basis for several important discoveries.

Penumbra – target for protection
The progression of cell death is not uniform for all brain cells after stroke; a core region of almost immediate cell death is usually surrounded by a rim of tissue containing vulnerable cells that can survive for several hours. This rim is called the ‘penumbra’ and is the key target for most stroke therapies since early treatment can minimise cell death and nerve damage in this areaANCHOR.. The existence of the penumbra was originally shown in monkeysANCHOR ANCHOR. and has subsequently been found in human stroke patientsANCHOR.. The only current treatment for stroke, thrombolysis, probably works by restoring blood flow to the penumbra before irreversible damage occurs.

Mechanisms of brain cell death
Monkeys and rodents have also been important in identifying processes induced by stroke that lead to brain cell deathANCHOR. These include massive release of glutamate causing 'excitotoxicity', the excessive formation of free radicals. This leads to oxidative stress, which stimulates an inflammatory reaction in the brain. This inflammation involves the migration of white blood cells carrying neurotoxic substances (nerve poisons) into the brain, causing more nerve damage.

(i) Minimising acute brain damage
Knowing how stroke causes brain cells to die has led to potential treatments to reduce the extent of cell death after stroke. Medicines that block the excitotoxic effects of glutamate or that scavenge free radicals (antioxidants) reduce brain damage in rodents and monkeysANCHOR ANCHOR ANCHOR. Research in rodents led to the unexpected discovery that blocking the effects of interleukin-1 (IL-1), a key regulator of the immune system, is beneficial following a strokeANCHOR ANCHOR. Promising results were recently reported in preliminary human trials of a drug that inhibits IL-1, and further clinical trials are likelyANCHOR.

A key area of current research is the interaction between blood vessels and the neurons and glial brain cells, which together form the 'neurovascular unit'ANCHOR. Studies on rodents, showed that all components of the neurovascular unit are affected by stroke, in particular they are damaged by proteins called matrix metalloproteinasesANCHOR. This has led to the idea that treatments should protect all components of the neurovascular unit. Recent studies have shown that medicines blocking the actions of matrix metalloproteinases help rodents after strokeANCHOR ANCHOR.

(ii) Promoting repair and recovery
Stroke patients' long-term outlook is not solely determined by the initial damage, but also by brain repair processesANCHOR. A population of brain cells called neural stem cells has been shown to multiply and develop into mature neurons (neurogenesis) in response to stroke in rodentsANCHOR. Likewise, there is evidence that neurogenesis is accompanied by the formation of new blood vessels (angiogenesis)ANCHOR.

Harnessing the natural ability of the brain to repair itself is an area of extensive research. Growth factors that promote neurogenesis and angiogenesis (VEGF, FGF-2, erythropoietin, neuregulins) improve outcome in rodentsANCHOR.

A new type of drug, known as a PSD-95 inhibitor, prevents brain cells from undergoing programmed cell death when exposed to neurotoxic signalling pathways. This was developed in tests on macaque monkeys, where it reduced damage to the brain even when administered 3 hours after the strokeANCHOR. This has since successfully completed phase II clinical trials in humans.

(iii) Better clot busters
Current thrombolysis treatment uses recombinant tissue-plasminogen activator (rt-PA), to break down blood clots and re-establish blood flow. However, the use of rt-PA carries risks such as haemorrhage and excitotoxicity. Patient studies have shown these risks outweigh potential benefits when treatment is given more than three hours after strokeANCHOR ANCHOR.

Current research is exploring ways to extend the time window for thrombolysis, to increase the number of patients that can be treated in this way. Studies in rodents have shown that a similar chemical derived from bat saliva, desmoteplase, also dissolves blood clots but has fewer adverse effectsANCHOR ANCHOR ANCHOR. Recent studies in stroke patients suggest desmoteplase may be safe and beneficial up to nine hours after strokeANCHOR. A larger study to confirm this effect is ongoing. The development of improved clot-busters provides a good illustration of the importance and benefits of a two-way flow of information between animal and human studies.

Numerous medicines have been effective in rodents and monkeys. However, with the exception of clot-busters, none have reproduced these benefits in human stroke trials, including the free radical scavenger, Cerovive. Despite many similarities between rodent/monkey models and human stroke, there may remain important discrepancies that could contribute to the differing results in animal and human studies.

Animal models do not suffer the multiple illnesses that are routinely seen in stroke patients – such as high blood pressure, atherosclerosis, diabetes, and infection – that may have an impact on stroke outcome. For example, it was recently shown that inflammation outside the brain can worsen damage after stroke in miceANCHOR.

So current efforts aim to develop new models and refine existing models to more closely reflect the human disease. These include the use of rats with high blood pressure and mice that develop blocked arteries. Such models should provide a more realistic setting in which to study what happens in brain injury and the potential of stroke treatments.

To read more about how animal research helps in other cases of brain damage visit our Brain Injury page.