Down syndrome is a genetic condition caused by an additional copy of chromosome 21ANCHOR. The condition is also known as Trisomy 21. People with Down syndrome typically suffer from health complications arising from the extra chromosome and have some form of learning difficulty. 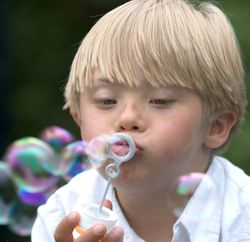 Signs of Down syndrome are apparent from birth, with several physical characteristics including a small chin and flat nose. Individuals with Down syndrome are also at a higher risk of problems with their organs, especially the heart, which may require surgery shortly after birth. The life expectancy of Down syndrome patients has risen dramatically in recent decades, from 12 years in 1949 to 60 years in 2004ANCHOR.

Neurological defects become more apparent as the babies develop, with contributing to the average IQ of 50 found among adults with Down syndromeANCHOR. The extent of this can vary significantly between individuals and early deficiencies in cognitive skills can be improved over time.

Studies in mice suggest that the additional chromosome activates genes that block the growth factor VEGFANCHOR. This inhibits the development of blood vessels, which has the unexpected benefit of protecting against cancer by preventing blood supply to tumours.

Beyond treating organ defects, there are no current medical therapies for those with Down syndrome. Much treatment is based on therapists focussing on speech and language as well as physiotherapy to encourage development.

Studies in mice have shown that a mutation in the Bub1 gene increases the likelihood of additional chromosomes in their offspringANCHOR. Bub1 works as a check-point in cell division and controls the allocating of chromosomes during cell division.

Genetically modified mice, known as the Ts65Dn strain, have been bred with additional copies of some genes similar to those found on human chromosome 21. These have been used to better understand the causes of the various symptoms of Down syndrome and inspire new treatments. In 2010, researchers discovered that the Olig1 and Olig2 genes were over-active in these mice5. Reducing the activity of these genes corrected neurological problems such as abnormal brain activity. This could be applied to humans by using gene therapy or designing new drugs.

Some drugs that have already been approved to treat other conditions are now being found to also have potential benefits for improving brain function for those with Down syndrome:

– Researchers in Italy showed in 2012 that lithium, a common treatment for bipolar disease, increases the growth of neurons in the brain of Down syndrome mouse modelsANCHOR. Clinical trials have been conducted to test lithium on patients, although the effects are not yet known. Lithium does have several side-effects on the thyroid, heart and kidneys which are of particular concern for patients with Down syndrome.
– Clinical trials are also on-going to test the efficacy of memantine, an approved drug for treating Alzheimer’s diseaseANCHOR. This was first tested in Ts65Dn mice and small trials in humans have shown improvements in verbal memory.
– More recently, an asthma drug called formoterol was found to strengthen nerve connections in the hippocampus in Ts65Dn miceANCHOR. After 2 weeks of being given the drug, the mice showed improvements in their learning. The drug works by improving the brain’s response to the neurotransmitter norepinephrine, which is produced less in people with Down syndrome.

In 2013, researchers demonstrated that inserting the XIST gene into one of the copies of chromosome 21 in cells ‘silences’ the chromosome biochemicallyANCHOR. The XIST gene is a normal human gene that is responsible for silencing one of a woman’s X chromosomes. By splicing it into trisomic cells, it can almost restore normal function. At this stage, this technique is likely to be mostly beneficial in better understanding the biochemistry of these cells rather than being directly applied to new treatments.

More recently still, in September 2013, researchers treated new-born Down syndrome mice by injecting them with a small molecule known as a Sonic hedgehog pathway agonistANCHOR. By adulthood the treated mice had more normal brain development and were improved in behavioural tasks compared to control Down syndrome mice, however they still showed differences to normal mice.