Lymphoma is catch-all term for up to 40 different types of cancer that all arise from white blood cells known as lymphocytes. Lymphoma is commonly split into two types: Hodgkin and non-Hodgkin lymphoma, with non-Hodgkin accounting for about 80% of cases.ANCHOR 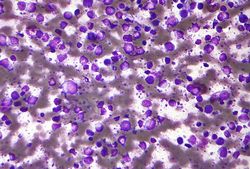 Survival rates vary significantly depending on the type and stage of the disease, as well as the age of the patient, however rates have increased dramatically over the past three decades.ANCHOR ANCHOR The standard treatments are radiotherapy and/or chemotherapy, but there have been numerous advances made in recent years.

Chemotherapy and radiotherapy are often used to destroy the cancerous white blood cells; however these also kill the functioning immune cells, as well as the stem cells that can produce more. To fix this after treatment, patients can receive a transplant of haematopoietic stem cells that are found in bone marrow.

As recently as 1970s, bone marrow transplants were thought to be impossible.ANCHOR All attempts to do so resulted in death from infections or immune reactions. This was unexpected after successful trials in rodents, however this may have been due to the inbred nature of the laboratory specimens.

Don Thomas, who won the Nobel Prize for his work in 1990, experimented with dogs, which have similar genetic variation as humans and can develop blood diseases such as non-Hodgkin lymphoma.ANCHOR He developed a procedure involving radiation to destroy the cancer, matching the tissue between donor and recipient, and drug cocktails to suppress the immune system. Although initial survival rates were low, gradual progress in anti-rejection drugs allowed for transplant from non-related donors by 1979.

Recently, Meloxicam, an aspirin-like drug, has been shown to encourage stem cells to leave bone marrow following a transplant, which can be a particular problem for non-Hodgkin lymphoma.ANCHOR This was first tested in mice and baboons before now being currently in human trials.

To avoid destroying the haematopoietic stem cells, monoclonal antibodies can be used to specifically target the lymphocyte white blood cells, including the malignant cells that cause the lymphoma. The antibodies recognise these cells and latch onto them, which recruits other parts of the immune system to destroy the cell. Campath 1-H, or alemtuzumab, is a humanised rat antibody which was first successfully used in 1988 to treat non-Hodgkin lymphoma.ANCHOR ANCHOR The original rat antibody was rejected by the immune system and was destroyed itself, but through genetic engineering techniques researchers took the important recognition regions from the rat antibody and placed it into the gene for the human antibody. This ground-breaking approach has since been applied to other cancers, and Campath itself is now being investigated as a multiple sclerosis treatment.ANCHOR ANCHOR

Rituxan, or rituximab, is now one of the standard treatments for lymphoma and is based on the same principle as Campath.ANCHOR It is a chimeric mouse/human antibody and is often used in combination with a chemotherapy treatment known as CHOP (cyclophosphamide, hydroxydaunorubicin, oncovin, prednisone). It is also used in treatments for chronic lymphocyte leukaemia and rheumatoid arthritis.ANCHOR

Antibodies have also been used to direct sources of radiation to cancer cells and target them more efficiently.ANCHOR Both Zevalin (ibritumonab tiuxetan) and Bexxar (tositumomab) were pioneering drugs approved in the early 2000s.ANCHOR These were formed from radioactive isotopes attached to mouse antibodies that recognise and bind to cancer cells. They are very potent treatments and are even effective in cancers that are resistant to Rituxan.

Unlike most vaccines that aim to prevent a disease, a lymphoma vaccine aims to stimulate the immune system into attacking the cancerous cells that are already present.ANCHOR There have been a few trials of vaccines that have failed to be effective enough, however a new vaccine called BiovaxID has showed promising results in phase III clinical trials in 2010.ANCHOR The vaccines are manufactured to target a certain protein on the surface of the cancer cells, known as the idiotype. Currently, each vaccine has to be made bespoke to each patient’s cancer. This can take several months and is very expensive, so work is continuing to find a generic target for all lymphomas.

The vaccine is currently targeted at follicular lymphoma, the most common form of low grade lymphoma. The cancer tends to go in cycles of remission and relapse as it develops resistance to different treatments. The vaccine is designed to be used at early stages or when the cancer is in remission in order to target the remaining cells. This approach increases the time between relapses from 30 months to 44 months.

In 2012, the FDA said that it would not approve the vaccine for use in the US without further trials, resulting in the bankruptcy of the manufacturer.ANCHOR However, the vaccine is still expected to get market approval in Europe and Canada in late 2014.