Rinderpest (from the German for cattle plague) is an infectious disease that has killed hundreds of millions of cattle over hundreds of years, often causing famine. The last recorded case of rinderpest was in 2001 and it was formally declared to have been eradicated in 2011,  becoming only the second disease (after smallpox) to have been eradicated through human interventionANCHOR.

The rinderpest virus belongs to a group of viruses called the morbilliviruses which include the viruses that cause measles, peste des petits ruminants (PPR) and canine distemperANCHOR. Rinderpest virus infects cattle with an 80-90% mortality rateANCHOR and symptoms include fever, discharge from nose and eyes, ulceration, diarrhoea and dehydration.

The first recorded outbreak was in 376 AD in Europe and details of outbreaks in Europe and Asia since the 18th century have been well-documented, such was the scale of destruction.ANCHOR The urgency of the situation led to great advances being made in disease management, particularly movement restrictions and the inspection and disposal of animals. The disease even prompted the creation of the world’s first veterinary school to train rinderpest specialistsANCHOR. Despite these control measures rinderpest spread to Africa, where a pandemic in the 1880s not only damaged cattle populations, but also buffalo, giraffe, wildebeest and antelopeANCHOR. 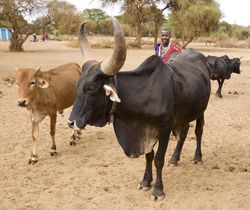 Robert Koch developed the first form of a rinderpest vaccine in 1897 when he noted that animals could be protected from the disease by injecting them with blood and bile from an infected animalANCHOR. This procedure was then made safer by instead using serum from a recovered animal, a process which was widely used in India and Africa.

The development of cell cultures provided the opportunity to produce the attenuated vaccine without using live animals. In 1962, Plowright and Ferris found that they could grow a strain of rinderpest in bovine kidney cellsANCHOR. This vaccine still had the disadvantage of needing refrigeration and also required fresh kidneys to grow the virus. Further developments allowed the use of the Vero cell line which could be maintained continuously without needing fresh tissue, and freeze-drying techniques allowed the vaccines to be stored without refrigerationANCHOR. These developments were crucial in providing vaccine to eliminate rinderpest in its final strongholds in rural Africa.This was later improved further by using a weakened, or attenuated, virus. This vaccine was created by passing the infection through a series of goats; the virus does not cause the goats to become ill but it can multiply and gradually lose its ability to cause disease in cattleANCHOR. Being exposed to this caprinised virus would protect most cattle for life against the wild virus, but it was not suitable for all breeds of cattle. These could be treated by different forms of the vaccine created by passing the virus through rabbits, goats, sheep, calves, pigs and chick embryosANCHOR.

Much of the success of the vaccination campaign was due to technologies developed to detect the presence of the rinderpest virus in populations and to differentiate between strains. Most of these tests relied on plates coated with samples of the virus or an antibody that binds to the virus. The antibody-coated plates could detect the virus when presented with a sample from an infected animal and the virus-coated plates could detect antibodies from an immune animal.ANCHOR In addition, genetic sequencing of virus samples allowed researchers to identify routes of transmission of rinderpest between regions and discover new sources of the disease.

One difficulty of diagnostics is differentiating between vaccinated animals and previously infected animals. Both will have antibodies against the virus but telling these animals apart would provide a clearer picture of where pockets of the disease remain. Scientists were able to develop genetically modified viruses which each contain special markers, including green fluorescent protein, which can be used to trigger antibodies that are distinguishable from contracting the wild diseaseANCHOR. Unfortunately these vaccines were not approved until after rinderpest had been eradicated, but the technology and approach can be applied to any future campaignsANCHOR.

One aspect that made eradication possible was that the wildlife did not act as a reservoir for the disease. Although lots of wildlife died from contracting rinderpest, continued research showed that the virus was not maintained in those populationsANCHOR. This research allowed the vaccination programme to be implemented efficiently by focussing on livestock disease.

Even though the disease has been declared eradicated, samples of rinderpest are still stored in dozens of laboratories. In July 2013, an international moratorium on all rinderpest research lifted and scientists are now able to conduct research on the rinderpest virus, subject to approval from the Food and Agriculture Organisation of the United Nations (FAO) and the World Organisation for Animal Health (OIE)ANCHOR.

While it may seem unusual to conduct research on an eradicated disease, the first project to be given approval is aiming to reduce the stocks held of the rinderpest virus. While some of these stocks are tissue samples and live strains of the virus held for further research, most of the samples are live-attenuated virus vaccines. These samples of vaccines are held in 53 labs across 34 countries and most are reluctant to destroy their vaccines in case of an unexpected disease outbreakANCHOR.

This new research is aiming to determine whether vaccines developed for PPR (peste des petits ruminants), a closely-related virus, is effective against rinderpest. If successful, this would encourage countries to relinquish their stocks of the rinderpest virus and reduce the risk of an unintentional release into the wildANCHOR.