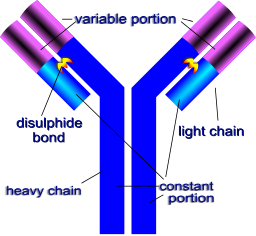 Only a small proportion of animals used in science are used for in vivo experiments on whole, living animals. Many other standard biomedical techniques which are used in research rely on the use of animals. Antibodies are a type of protein released by B-cells of the immune system, and are responsible for the ability of the immune system to recognise specific foreign particles. Antibodies can recognise and bind to many types of biochemical structures, including proteins, DNA, RNA, small chemicals, sugars and lipids. Since the beginning of the 20th century, antibodies have been used to diagnose and treat illness, as well as providing the foundation for many experimental techniques.

Antibodies have many uses in medical research. These molecules, generated by the immune specifically fit a target within the body, and are often used as biochemical markers or as methods of targeting drugs, as well as to study infectious agents or allergies. All vaccine research relies on the use of antibodies and they are frequently used for in vitro or culture work, and provide a valuable tool for identifying or locating any specific structure found in the blood. They are also used as antivenoms, to treat dangerous snake bites, spider bites or jellyfish stings.

Antibodies cannot be made artificial means, and must be generated by an intact mammalian immune system. Many animals can be used to generate antibody, including sheep, goats, dogs and horses.

In experimental laboratory work the New Zealand white rabbit is often used, as they are relatively large animals, which are easy to breed and keep. Smaller animals such as rats and mice are sometimes used, but only produce a small quantity of blood. Larger animals such as horses are often used to generate antibody for medical purposes, when large amounts are required.

Guidelines on antibody production vary with region and institution, and are frequently reviewed by ethics committees. The following is a brief overview of a technique for producing polyclonal antibodies, which are purified from the serum of mammals.

The rabbits used in antibody production are generally fully grown animals of over 12 weeks old, and are kept in a facility for no more than 6 months.

A test-bleed is carried out on the rabbit before antibody production begins. Animals are given a sedative such as acepromazine. The ear is shaved to expose the marginal ear vein, which is anaesthetised using a local anaesthetic cream such is lignocaine. A syringe and needle is then inserted into the marginal vein, so that the needle is visible inside the vein. When the plunger pulled back slowly to take blood from the ear, blood can be seen filling the syringe. When the desired amount of blood has been collected the syringe is carefully removed, and pressure is applied to the vein until the bleeding stops. The blood is then stored in serum tubes which are kept at 37ºC until the blood clots, and then refrigerated.

Once the test bleed has been preformed antibody production can be begun by immunising the rabbit. The area to be injected is shaved and cleaned with alcohol. The antigen, to which the antibodies will be produced is injected subcutaneously (beneath the skin), usually in several different areas, along with an adjuvant, a substance designed to increase the immune response so that more antibodies are produced.

The rabbit is then left to recover and produce antibody. Test bleeds are carried out at regular intervals (often weekly or fortnightly) to check the level of antibody in the blood. An ELISA test is used to show whether antibody is present, using the pre-production test-bleed as a negative control. Once the appropriate level of antibody has been reached blood is removed from the rabbit using a cardiac bleed. In this procedure the rabbit is deeply anaesthetised, and a needle is inserted directly into the heart as it is beating, to remove as much blood as possible from the body. Generally more than 100 ml of blood can be obtained from each rabbit. When no more blood can be obtained the rabbit is killed by a lethal injection of pentobarbitone into the heart.

The aim of this process is to give high titer, high affinity antiserum which can be used in experiments or tests used to diagnose illness or allergy. The whole procedure may take several months, but the time will vary depending on the antigen and the animal used.