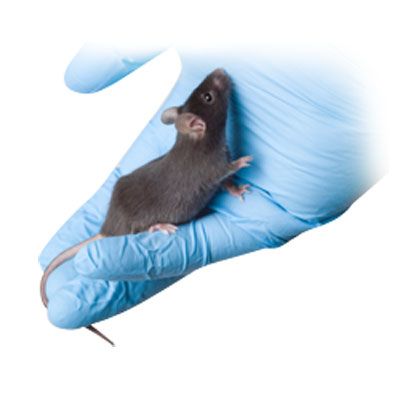 New medicines or chemicals which may affect the health of humans are required by law to be tested on animals for safety.

While animal tests cannot predict all of the reactions a human may have to a new medicine, they can give us a lot of information to help prepare for the tests on people that will happen later on.

Safety testing begins early in the development of a potential drug, usually with acute toxicity tests where a single dose of the substance is given to an animal. Most safety testing is done using rodents, but before anything can be given to a human, it must be tested on a rodent and a non-rodent mammalian species.

Studies are designed so that the maximum information is obtained from the smallest number of animals. In the past, large numbers of animals were used to determine the lethal dose of a compound (the LD 50 test). This test is now rarely used, and toxicity studies are carried out on small groups of around three to five animals of each sex per dose. The non-rodent species groups are often smaller.

Safety tests begin with acute toxicity testing, where the animals are given a single dose of the test compound. These tests establish the range of doses, from the smallest amount that has any effect at all, to the amount that is life-threatening. The law recommends that effects on test animals should be compared with the effects on control groups of animals which have not received the compound.

The test compound is given to the animals by a single IV injection. If it is intended to be taken by humans though any other route, such as a tablet, it must also be tested this way in animals. The way that a drug is taken affects the amount of the compound which reaches the blood stream, and how it is distributed around the body.

Animals are observed for 14 days after they have received the compound, and detailed records are made of any toxic effects, including when the first signs of toxicity occur and whether there is any recovery. These studies can also provide more general data about a potential drug, such as the dose-response relationship. When day 14 is reached all the surviving animals are all killed by a humane method, and dissected to look for any further signs of toxicity.

The results of these tests allow further studies to be planned, as they give information about the dosage that should be used, and how toxicity may occur. For example, a study may test whether the compound damages the liver or whether it interacts with DNA. Compounds that are found to be toxic are not necessarily abandoned, as the degree of allowable toxicity will depend on the intended medical application. If the drug is intended for the treatment of life-threatening diseases, toxicity is less of a concern than in a drug intended for use in healthy individuals.

Repeat-dose testing explores how a compound acts on the body in more detail than the single acute-dose tests, using a different group of animals. The animals receive a series of doses over a period of time, which is more like the way medicines are usually taken. The organs that may suffer toxic effects, such as the liver, are examined and the safe starting dose for human clinical trials is estimated.

After initial pilot studies, safety and toxicity tests are based on the clinical plan, so that the structure and duration of the animal testsare directly linked to the clinical trial protocol. This, in turn, will be based on proposals for the target human population, the human dose, the treatment regime, route of administration (tablet / injection etc.) and how long the doses will be given for. The target population is particularly important, as this takes account of the effects of disease or age on the action of a potential drug.

From the clinical plan a toxicological plan can be drawn up, showing the number of studies the compound must undergo before it can reasonably be given to a human volunteer. Enough data must be gained from the animal studies to make useful decisions about a compound, and any potential build up that might occur in the body. The minimum duration of repeated-dose toxicity studies in animals, before testing can move to single dose trials in humans, is recommended to be 2 weeks in the EU and US, and 4 weeks in Japan. These studies must be carried out in both a rodent and a non-rodent species. Animal studies to support longer trials in humans usually match the length of the human trial

Longer toxicity studies are used to support and inform long-term clinical studies. They are used to review the suitability of species used for a particular medicine by comparing reactions in the animals and people over time. Better animal models are more accurate and  lead to better outcomes for human patients.

Once a drug has been studied for long term toxicity in animals, and to determine whether it interacts with DNA to cause mutations, it can be tested on humans in phase I clinical trials.

New medicines continue to be tested on animals throughout the clinical trial process, and the results of the human studies are used to inform and refine the animal studies so that they reveal more useful and accurate data. Later stage animal testing includes tests into the effects on fertility, and tests to see whether the substance may cause cancer. These tests help researchers to design and adapt the human clinical trials.

Alternative methods are increasingly being used to replace animals in safety testing, especially at the early acute dose stage.

Work funded through NC3Rs contributes to this. However, changes to safety requirements for environmental toxicology and general chemical testing within the EU (REACH) may mean that the number of animals used in safety testing will increase overall in the coming years.