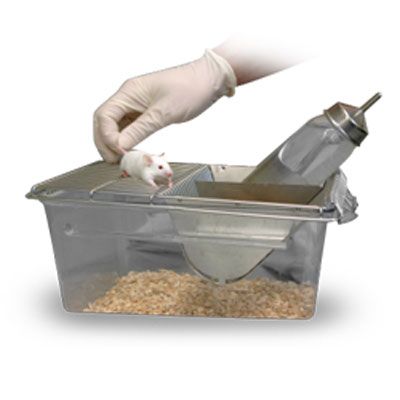 Drug development is time consuming and costly. Typically, it takes more than 12 years. The process is very tightly regulated both for safety and to make sure drugs are effective. Hundreds or even thousands of chemical compounds are investigated, but most of them are abandoned early on. The ones that are not dropped are extensively tested, both in vitro – which means in the test tube and petri dish – and in animal studies. That is before the long process of clinical trials begins, when drugs are tested in humans.

After all that, many drugs still fail to get approved as medicines often because of dangerous side effects or because the drug proves less effective in people than first hoped.

Computers are becoming more and more important in the drug discovery process. When researchers have discovered something that seems to cause disease, they can use computers to design a molecule that should be effective against it. Thousands of chemical compounds can then be compared to the computer model in a fast automated process, to find a few hundred that might be the basis of a new medicine.

Drugs are first tested in individual cells in vitro, which means in a dish or test tube rather than an animal. This process, which is largely automated, identifies the basic properties of each compound.  Large numbers of compounds are abandoned at this stage because the way they interact with cells makes them unsuitable.

The remaining compounds are studied in more detail in tissue preparations (tissue culture) which are multi-cellular and can sometimes be grown artificially in the lab.

Of the thousands of potential drugs screened, only a few will reach the development stage. Scientists begin to investigate the effect of the drug on more complex bodily systems, rather than just individual cells or sections of tissue. Some of this can be done with computers and other techniques that mimic the workings of organs such as the lungs or liver. When it is impossible to use these methods, animals are used instead, usually mice.

An important part of exploratory development is investigating how to deliver the drug, making sure it reaches the parts of the body it needs to reach and doesn’t accumulate where it isn’t wanted. This work is usually done in mice and rats and provides valuable information about the action of chemical compounds that can be used in future studies, even if the particular drug being studied turns out to be ineffective.

If the drug seems promising after the initial development studies, it will be investigated in more depth. At this stage more animal studies are usually needed, sometimes involving more than one species, although mice are still the main model used by far. Non-animal studies will still happen alongside the animal work. The non-animal studies on cells and tissue, give information about the specific effects of a drug at a particular place in the body, while animal studies give information about the effects of the drug on a whole, living system, and how it affects the interactions between different organs of the body.

These studies will include a full assessment of drug delivery systems, and the first safety tests. They will look at how the drug might interact with other medicines and look for other possible side effects.

Before a potential new drug can be tested on humans its safety must be assessed through toxicity testing. While these tests cannot predict how a human body will respond to the compound, they are used to determine the range of doses that will be used, which organs of the body the compound might affect, how it will be administered, how long and how frequently individuals should be exposed to the substance, and to what extent its chemical structure is intrinsically toxic. By law, these must be determined before it is considered reasonable to test a substance on human volunteers.

A microdose is defined as less than 1/100th of the pharmacologically active dose of a compound, as determined by pre-clinical animal testing. Pioneered in the EU, microdosing has recently been reviewed by the FDA as part of their critical path initiative, and guidance has been issued for its use in the US drug development process.

The tiny microdoses of a compound are given to human volunteers during the later stages of drug development and toxicity testing, immediately prior to clinical trials. This new development phase has been termed phase 0 human studies.

Clinical trials are medical studies in humans. They are usually done in three phases. The phase 1 trials involve small numbers of healthy volunteers and are intended to test the findings of previous studies in animals and non-animal models, to see how much of the drug is safe in people and to make sure it doesn’t have any unexpected effects.

At phase 2, the drugs are tested in patient groups, to test their effect on the disease and to keep and eye on safety.

Phase 3 trials involve larger numbers of volunteers. Half the group get the new drug and the other half are given a harmless substitute called a placebo. Neither group know which one they are taking, and the people giving out the doses don’t know either. This is called a double-blind trial.

The drugs undergoing trials can have unpleasant, serious or life-threatening side effects, but the risk to those undergoing the trials is minimised as much as possible. The development process will have given detailed information on the drug, which gives a guide as to how the new drug is expected to behave.

Although the procedures are similar, the exact legislation governing clinical trial protocols varies by country. Approval for the planned trials must be obtained from the relevant regulatory body before they can go ahead. Once begun, trials are audited and amended for their duration.

Clinical trials are carried out in four phases, each of which is designed to answer different questions about the new drug:

Phase I trials aim to discover how humans react to and metabolise the new drug. Tests are carried out on a small group of healthy volunteers (usually around 20-80). They are carried out on female volunteers or patients when it is unlikely that testing in healthy male subjects will be informative. The drug is given in increasing doses to determine the safe dosage range and the pattern of side effects. The action of the drug, its metabolism, its distribution in the body will be determined, and the first comparisons of the drug’s effectiveness compared with placebo may also be made.

Phase II of trials test the effectiveness and the safety of the drug in a larger group of people (100-300). This group consists of people with the condition being studied and healthy volunteers, so that a profile of the common short-term side effects can be built. The phase II trials are controlled studies, where the drug will be compared with a placebo to assess its effectiveness. Controlled trials are double blind studies, so neither the volunteers nor the researchers administering the drugs know which subjects received the drug candidate and which received the placebo.

Phase III trials are wider scale and consist of both controlled and uncontrolled studies. Measures of the drug’s effectiveness have already been obtained during phase II, and the benefits versus the risks of the drug are studied in detail. A larger group of patients in a wide variety of clinical settings will be studied. This phase collates the information which will be used for the packaging of the drug, and the advice which will be given to those administering the drug. Some uncommon side-effects may be identified at this stage.

Long-term phase IV human studies are carried out once a drug has been licenced. They continue to investigate longer term side effects, risks, benefits and the optimal use of the drug. Animal work investigating fundamental ways that the drug affects the body often form part of phase IV clinical trials. Rare side-effects are frequently identified during these trials. There may not have been enough people taking the drug to notice a harmful effect before. Serious side effects seen after-market in drugs will be confirmed in animal studies, so that advice on how the drug should be used can be adapted. On rare occasions severe side-effects are identified and on risk-benefit analysis the drug is withdrawn.

In the USA, approximately 11% of drugs that begin phase I clinical trails are eventually licensed.

Medicines which are successful at every stage can apply for a product licence before it can be prescribed by doctors. The application for licence must be submitted to the appropriate regulatory body for the country where the medicine will be sold. Each regulatory body has their own submissions and approval processes.

Here in the UK it is through the Medicines and Healthcare products Regulatory Agency.