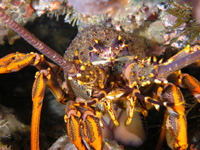 Decapods are the order of invertebrate crustaceans which includes crayfish, crabs, lobsters, prawns and shrimps. They are useful and appropriate models for many areas of biological research, and are also  important to many economies as highly-valued edible shellfish.

Decapods and the economy
How do decapods differ from mammals?
Decapod nervous systems
Do decapods feel pain?
Biomedical research
Neurology
Biochemistry
Conservation and the environment
References

Decapods and the economy

Global shellfish production is worth well over US $300 billion per year and shellfish farming is the fastest growing sector of the aquaculture industry worldwide. Decapod crustaceans account for about one third of this. Lobster production alone is valued at £30 million per year, with crab and cold water shrimp representing other important species.

One of the greatest problems facing aquaculture of shellfish is the control of infectious diseases. This problem is compounded by the fact that decapods, in common with other invertebrates, do not have the complex immune systems that permit the use of conventional ‘antigen-antibody’ vaccines used for humans and other mammals.  Instead they rely on simpler inflammatory type responses that have no ‘immune memory’ component that would facilitate prolonged protection by specific vaccines.

At present there no good alternatives to live animal experiments to find solutions to this problem because there are no ‘standard’ cell lines available for ‘replacement’ in vitro work and there are no suitable alternative ethically acceptable un-regulated ‘models’.

How do decapods differ from mammals?

Invertebrates are those animals without backbones and include many phyla with worm-like bodies as well as those with bodies covered by hard material. Most invertebrates are protostomes, whilst all vertebrates, including humans are deuterosomes. These two branches of the animal kingdom are defined by differences in their early embryonic development, indicating that they separated early in evolution. They have fundamentally different physiology, which makes it difficult to draw direct comparisons between their nervous systems and sensory organs.

Their small nervous systems can be compared with those of fish, which have the smallest brains among vertebrate species. While most vertebrates are thought to have some sort of consciousness, this is uncertain in both fish and invertebrates.

Arthropods are the most diverse phylum of the animal kingdom, and include insects, crustaceans and spiders. The basis for proposed legislation to protect the more complex decapod crustaceans, is that they may be capable of pain and suffering.

Crabs and lobsters have about 100,000 neurons, compared with 100bn in people and other mammals. While this allows them to react to threatening stimuli, there is no current evidence that they feel pain. Their nerves are more primitive, lacking the myelin coating which allows fast conduction of signals (pain signals  in humans travel exclusively through ‘fast’ fibres). The nerves of decapods therefore conduct at around 1ms-1, compared with 100ms-1 at which pain is conducted in mammals.

There is good evidence to suggest that decapods don't experience sensation the way we do. Their small number of neurons means they may not be able to be able to sense much at all. Additionally the organisation of their nervous system is very different from that of vertebrates: rather than having a spinal cord and brain where inputs from the sensory system are integrated, lobsters have a simple, system consisting of several discrete paired clusters of nerve cell bodies which are fused to a nerve cord which runs the length of the body. The largest of these ganglia control the mouthparts. In crabs, which have short bodies, the ganglia which would run through the thorax are fused into a single mass and there are fewer abdominal ganglia.

This question is often debated by policy makers responsible for regulation of the food industry and science. It is important that animals are killed in a humane way and do not suffer, but the differences between decapod and human nervous systems complicate the issue.

Some recent research has focused on this debate. For example a study shows that crabs respond to and move away from an electric shock stimulusANCHOR. However, observations in humans with injured spinal cords and the experiments on animals tell us that you cannot infer that a vertebrate can "feel" anything simply by observing that it responds with movement to a stimulus.

Invertebrates use opioids as chemical transmitters, and this has also been cited as an indication of their capacity to feel pain. In mammals opioids form part of the pain pathway. They are released in response to pain signals in the spinal cord travelling through the spinal cord. Opioid transmitters administer the influence of higher brain functions on pain, ensuring that the severity of the pain is appropriate to the situation. The analgesic, morphine, acts on this system to relieve pain, and its effects are reversed by the opioid antagonist, naloxone.

Crabs respond with a threat display in response to electric shocksANCHOR, or to striking the shell between the eyestalksANCHOR. Both of these experiments showed that the behaviour could be eliminated by administration of morphine and reinstated by injection of naloxone. It is difficult to know whether this implies that the stimulus is painful, but it is likely that the display is a simple response to a perceived threat in the environment rather than a sign of distress.

Neurochemicals often have very different roles in vertebrates and invertebrates, and their presence does not necessarily imply the perception of pain, since invertebrates lack the higher brain centres which suppress pain in mammals. In fact opioids are found all over the animal kingdom, in insects as well as crustaceans and mammals. Opioids have therefore governed responses to sensory input since early in evolutionary development, but all animals using opioid neurotransmitters are not necessarily able to experience pain.

We shouldn't lose sight of the fact that plants can sense and respond to innocuous and noxious stimuli. They can also communicate with members of their own species, as well as with plants of other species, sometimes miles away, yet we do not assume this to be evidence of sentience or their capacity to feel.

It is a huge stretch to extrapolate ‘feelings’ from humans to invertebrates when the two nervous systems are so different and pain is so subjective. The killing of crabs and lobsters by boiling them alive by the food industry presents an example of how our intuitive understanding of pain may not apply. The nerves of a crab from UK seawater (8-14ËšC) fail irreversibly above 25ËšC, a temperature reached very quickly in boiling water. This method of killing, is very rapid and humane, whereas freezing the animals slowly, as many people intuitively feel would be preferable, actually prolongs their death.

A report to the Norwegian Committee for Science and Food Safety ANCHOR, examined Sentience and Pain in Invertebrates. It concluded that there is little knowledge about the capacity for sentience in crustaceans and that their nervous and sensory systems appear to be less developed than those of insects. While lobsters and crabs have some capacity for learning, it is unlikely that they can feel pain.

Advances in knowledge depend on scientific and biotechnological advances facilitated by basic research into decapod physiology, immunology, pathology, reproduction and endocrinology, and neurobiology amongst others. All entail to a greater or lesser extent on animal experimentation to understand basic biological processes, to develop veterinary products and find new biomedicines. Examples of important findings made from these animals are given below.

The first clear demonstration of electrical, as opposed to chemical, synapses in the transmission of nerve impulses was made in crayfish. This work showed that synapses are not solely dependent on impulse transmission by neurotransmitters but can pass the junction simply by charge. This initial discovery has now effectively changed and extended our knowledge of brain function in humans. This landmark work still has enormous implications for tackling serious human illnesses, such as Alzheimer’s and Hodgkin’s Diseases as well as stroke and other paralysis conditions.

The existence of the important neurotransmitter GABA was also first demonstrated in crayfish. GABA is the most important inhibitory neurotransmitter in the central nervous system (CNS). In humans 60-75% of all synapses in the CNS respond to GABA. It is far less dominant in crayfish, because these invertebrates are neurologically far less complex, but during evolution its role in higher mammals has diversified and amongst other activities, GABA in humans is now known to regulate, mood memory and pain. It is the target of many pain-relieving drugs or anesthetic used in clinical medicine. Knowledge of the key role of this compound has had an enormous positive impact on human wellbeing.

Crayfish were also the experimental models in which behavioural-command neurons were discovered. These are important neurons which singly can stimulate quite complex patterns of behaviour. This has radically changed our understanding of human behaviour, in relation to addiction or certain types of drugs.

More recently, in the 1990s, neurobiological work on decapods has revealed that the level of serotonin (another very important neurotransmitter in humans) varies with dominance or social status. This discovery has led to the acceptance that not all individuals, even in higher animals, including humans, will respond identically to certain drugs or treatments but rather to according to the chemical status of their brain (mood, confidence, social standing and well being). This has revolutionised approaches to treatments of certain conditions, especially in elderly, depressed or young individuals.

Studies on limb and neural regeneration in decapods (crayfish and lobsters) as experimental models continue to inform us about basic biological processes that have relevance (and possibly biotechnological application) for recovery from trauma or stroke, or in coping with human disease states such Alzheimer’s and other dementias.

Landmark work on decapod immunity includes the discovery of a complex recognition and regulatory enzyme cascade in decapods, which bridges the complement system of more advanced organisms and the clotting systems of simpler ones.  This work was the first to reveal the biochemical events that constitute the inflammatory pathways in arthropods. It opened up the work on insects that permitted genetics to be used to decipher complex pathways and signalling systems in fruit flies (relatives of decapods), and is the basis on which disease control strategies in aquaculture are being explored.

There have also been important discoveries of novel families of natural inducible antimicrobial proteins from decapods, many of which are salt-tolerant and active against some important human pathogens and even viruses. Most existing antibiotics are inactivated by salt (e.g. in sweat), so these natural proteins from  marine animals have potential for exploitation as topical (skin surface) antiseptics.

Recently the implantation of certain genes into live crustaceans has been achieved. This technique now allows us to find ways to improve traits, such as disease resistance, colour, taste, growth rate and size in decapod shellfish reared in aquaculture. It could also be used to prevent the animals making the allergens to which so many people are sensitive and whose lives are put at risk from the presence of traces of decapod muscle in pre-prepared or restaurant foods.

Research has shown that many compounds marketed to shellfish producers as ‘immune stimulating’ have no real benefits in prolonging survival of infection. They appear to be a waste of money and when used routinely induce ‘immune-fatigue’ that impacts negatively on the wellbeing of the stock.

Pathogen experiments on crayfish have demonstrated that some benign microbial commensals of exotic decapods, introduced for aquaculture purposes, jump host to native species that have no natural resistance to these bacteria. The effects on native crayfish populations are devastating. A good example is the near eradication of the UK crayfish by a fungal pathogen carried by imported Signal crayfish and transmitted into British waterways in the 1980s. The massive reduction in populations of the native crayfish has meant that waterways previously kept clear by their grazing activities have become choked with algae to the point of anoxia. This has had adverse knock-on effects to the small fish that populate the waterways, and Wetland birds that feed on them have suffered in turn.