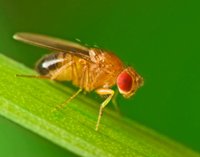 Drosophila melanogaster, or fruit-fly is widely used in scientific and medical research. This 3mm-long insect usually accumulates around spoiled fruit. It has been used in genetics and developmental biology for almost a century, and today several thousand scientists are working on many different aspects of its biology.

The importance of Drosophila as an animal model was realised by Thomas Hunt Morgan, who was awarded the 1933 Nobel Prize for physiology or medicine after demonstating that genetic information is carried on chromosomes using drosophila. Since then this tiny insect, which breeds rapidly and is easily kept in a labaoratory, has performed a crucial role in genetics research.

Its importance for human health was recognised more recently by the award of the Nobel prize for medicine in 1995, for work on the genetic control of early embryonic development. Mutant flies with defects in any of several thousand genes are available, and the entire genome has recently been sequenced.

Drosophila helped in the development of drugs to combat pathogens responsible for a range of diseases from skin infections to pneumonia and meningitis. Recent research with fruitflies has focused on the pathology of Alzheimer’s disease, for although the flies have a very simple brain they have highly developed muscles and nerves.