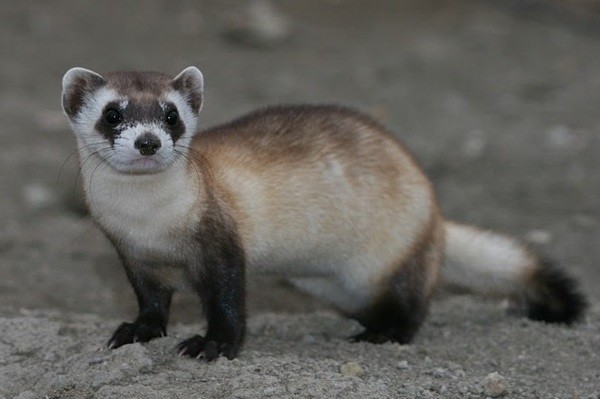 The ferret (Mustela putorius furo) is the domesticated form of the European polecat, a mammal belonging to the same genus as the weasel, Mustela of the family Mustelidae.

Ferrets are closer biologically and physiologically to humans than the mouse or the rat. While they don’t look like us, they are often used as models to study respiratory diseases as they contract the same respiratory viruses as humans and their lungs and airways bare a striking physiological similarity to human lungs.

Ferrets catch the Flu and are the best model for studying influenza in humans. Human influenza naturally infect the ferret, and infection closely resembles that in humans, with similar clinical indicators (sneezing!), pathology and immunity. Ferrets have helped understand transmission of the virus, the development process of typical influenza infections, age-related susceptibility to influenza infection and helped in vaccine development.

It turns out ferrets have more in common with women than men. Their oestrous cycle or sexual cycle is similar to the human menstrual cycle, and have therefore become important in reproduction research. In particular, they have been useful in determining the environmental factors that influence seasonal reproductive activity, the sexual differentiation in the brain and the physiological factors which control puberty and ovulation.

Extraordinarily – female ferrets will become ill and even die if they don’t mate. Female ferrets in heat secret high levels of oestrogen and until they mate, the hormone stays in the blood. If it remains there for a prolonged period of time, it causes a progressive depression of  bone marrow that results in a life threatening depletion of blood cells. While that does not happen in humans – but it still helps understand a lot of what goes on during reproduction in nature.

In the video below Professor Wendy Barclay of Imperial College London explains the role of ferrets in her research into influenza. The ferrets we see are used to train scientists in how to handle the animals. We could not film the research ferrets because we might have given them a cold!