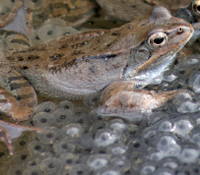 Frogs have been used as research models for many years. Their physiology is relatively simple when compared to mammals, and the study of frog muscles in the 1920's led to the discovery that the neurotransmitter acetylcholine was responsible for relaying nerve impluses signaling movement to the muscles.

Frog's eggs are so large and resilient that they are often used to train cell biologists in genetic manipulation and other physiological techniques. It is possible to clone a frog easily, by using a syringe to carefully remove the nucleus, containing genetic material from one egg. The nucleus of another cell can then be injected it into the egg, where it will divide and eventually grow into a frog.

The African clawed frog, Xenopus laevis, is often used in early studies of development. They produce very robust embryos, which can be easily observed at all stages. They have been particularly useful for studying very early events, such as the formation of the neural plate, which develops into the nervous system.

Although frog eggs, particularly Xenopus laevis, are relatively easy to manipulate, it is a tetrapoliod species - one whose cells have four copies of each chromosome. Most vertebrates, including humans, are diploid - having two copies of each chromosome. When genetics is an important part of the study the closely related species, Xenopus tropicalis is the prefered species.1 These frogs have a shorter breeding cycle, and have diploid cells, so the study results can be compared with other species more easily.

A new type of antibiotic?

Another perculiarity of frogs which of interest to science is their ability to survive in bacteria-filled water without wounds becoming infected. Studying this property of Xenopus laevis, Michael Zasloff, discovered a new class of antibiotic compounds in 1987.2 Their skin contains natural antibiotic peptides which he called 'magainins'. They are active against many disease-causing organisms, and may provide a future solution to the problem of antibiotic-resistant bacteria. They also present new questions about the immune system and whether higher animals have a similar front-line chemical defence against disease.

Recently, the first transparent animal with four legs was developed a Horoshima University in Japan. Japanese brown frogs Rana japonica, were bred, selecting for the recessive trait of light-coloured skin, until fully transparent frogs were born. The internal organs, eggs and other internal parts of the frog can be clearly viewed through the skin, making it a great model for studying many aspects of physiology in a whole, living body. By fusing genes for fluorescent proteins to the frog’s genes, the research team responsible for this development hope to create frogs that glow. Glowing frogs help in the study of specific genes as the frogs will glow, providing a visual indication, when those genes become active.

“Transparent frogs will prove useful as laboratory animals because they make it easier and cheaper to observe the development and progress of cancer, the growth and aging of internal organs, and the effects of chemicals on organs.” Masayuki Sumida, Hiroshima University