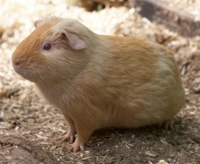 Guinea pigs have biological similarities to humans, which make them useful in many fields of research. They have been used as experimental animals for centuries; hence the term 'guinea pig' for a human experimental subject. The Spanish conquistadors brought guinea pigs to Europe from South America, where they had been bred domestically, 400 years ago. Since vitamin C was discovered through research on guinea pigs, they have been important in nutritional research, and were also crucial to the development of: vaccines for diphtheria, TB, replacement heart valves, blood transfusion, kidney dialysis antibiotics, anticoagulants and asthma medicines.

Guinea pigs were used in less than 13,000 scientific experiments in the UK in 2012, representing less than 1% of total animal research. The use of guinea pigs has fallen by over three-quarters since 1988, mostly due to a reduction in their use in safety testing. A recent contribution to this reduction has been the introduction of a milder test for the potential of chemicals to cause allergic skin reactions (skin sensitisation), which uses mice instead of guinea pigs. However, guinea pigs remain essential in many areas of research.

The guinea pig is also widely used to provide tissues and organs for research. Guinea pig blood components are widely used, and isolated organ preparations such as guinea pig lung and intestine are extensively used in research to develop new medicines. Such tissue and organ preparations were important in the discovery and early development of beta blockers to treat high blood pressure and drugs to treat stomach ulcers.

Numerous developments have used guinea pig intestine at some point in their development, for example the anti-nausea drugs used by cancer patients and the identification of naturally occurring pain killing substances known as enkephalins. Guinea pig intestine has also been extensively used to study the 'little brain' in the gut, which contains as many nerve cells as the spinal cord. This has given giving insights into not only the control of the gut itself but also the workings of nerve circuits. The information gathered from these studies is being used to develop computer models.

The extreme allergic reaction, anaphylactic shock, has been studied extensively in guinea pigs, which display this reaction more readily and strongly than most other species. Guinea pigs' airways are sensitive to allergens, so it has been widely used in asthma studies. The inhaled medications that are the mainstays of asthma treatment were developed using guinea pigs as were orally-active drugs for asthma such as montelukast. Guinea pigs continue to be useful for the development of improved treatments for asthma, and they are also used in the testing of vaccines against anthrax, currently an important area of biodefence research, and new medicines to treat drug-resistant tuberculosis.

As well as requiring Vitamin C in their diet, guinea pigs also need high levels of folic acid, thiamine, arginine and potassium, which make them useful in nutrition studies. They also carry most of their plasma cholesterol in low density lipoprotein, so they are also useful in the study of cholesterol and lipoprotein metabolism.

The structure of the guinea pig ear is similar to that of humans, meaning that their hearing range is also similar. Guinea pigs also display the Preyer reflex used in checking for deafness, in which the outer ear moves in response to a whistle. Guinea pigs are therefore a preferred animal model for studying auditory systems, and in 1961 Georg von Békésy was awarded a Nobel Prize for describing the mechanical mechanisms of the cochlea in guinea pigsANCHOR.

Hair cells are sensory cells of the auditory system, which convert sound into an electrical signal. This signal can then be communicated through nerve cells. These cells do not re-grow when damaged, and loss of hair cells often leads to deafness as we age. The first successful attempt to regenerate hair cells in the inner ear of a mammal, announced in 2003, was achieved in guinea pigsANCHOR.

The German scientist Robert Koch used guinea pigs to discover that TB was caused by the bacterium Mycobacterium tuberculosis, in 1882. The sensitivity of the guinea pig to this and other infections, and the similarities of its immune defence system to that of humans, has made it important in the study of infectious diseases.

In 1919 research showed that inoculation of guinea pigs with a small amount of blood from Yellow Fever patients produced a mild reaction in the animals. The same animals were later resistant to infection with Leptospira icteroides, while animals which had received no previous inoculation, or which had been inoculated with blood from malaria patients, died. The guinea pigs were said to have ‘Aquired Immunity’ to L icteroidesANCHOR.

The long gestation period of 59–72 days and mature central nervous system at birth means that guinea pigs are important in safety testing, particularly to prevent birth defects. However, it is the similarity of their immune system, and particularly their skin sensitivity, that led to their widespread use to test for allergic skin reactions.This use of guinea pigs to test for skin allergies has now been largely replaced by the milder local lymph node assay (LLNA), which uses mice and fewer of them. In 1999 many of these tests were carried out on guinea pigs, mostly for non-medical products. Now guinea pigs are rarely used.