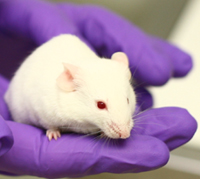 Following publication of the sequence and analysis of a mouse strain in December 2002ANCHOR the mouse became the animal model of choice for most laboratory experiments. The potential of mice for genetic manipulation means that their use is now often favored over rats and other rodents.

The mouse makes an excellent model for human disease because the organisation of their DNA and way their genes are expressed is very similar to humans. Their reproductive and nervous systems are like those of humans, and they suffer from many of the same diseases such as cancer, diabetes and even anxiety. Manipulating their genes can lead them to develop other diseases that do not naturally affect them, and as a result research on mice has helped understanding of both human physiology and the causes of disease.

Before genetic technology, mice were inbred to produce laboratory strains with particular characteristics. These inbred strains are very genetically similar, which makes them ideal for studying changes due to genetic modification.

What is a transgenic mouse?

The background to gene-targeting

A model to track flesh-eating bacteria

Our ability to manipulate their genes has made the mouse the most commonly used laboratory animal. In the UK their use has increased over the last 10 years, and a 5% increase was reported from 2005 to 2006. Most of these mice were used for breeding programmes and in fundamental biological research.ANCHOR The recent increases in the number of mice used directly result from the development of new technologies that allow manipulation of their genes.

What is a transgenic mouse?

A transgenic mouse is one whose chromosomes have been altered so that its genes contain foreign DNA. These genes are found in the nucleus of every cell of the body, so all of the mouse's cells contain the new DNA. The foreign DNA can come any source, and may be human, from another animal or from another mouse.

The change in DNA usually means the cells gain a function, such as producing a new protein. For example, some transgenic mice produce contain proteins recognised by human immune cells, and these can be used to model particular aspects of disease. The foreign DNA can sometimes mean a loss, rather than a gain in function as the new DNA might interfere with a biochemical pathway or prevent production of a particular protein.

Transgenic mice are useful models for understanding how genes regulate processes in the body, because the effect of changing a particular gene can be seen on the whole organism. They are also used to study human diseases which are caused by 'errors' in the way that the body produces certain proteins, for example in Haemophilia A, the crucial gene codes for a protein known as factor VIII which is needed for blood clotting.

The two main techniques for introducing the foreign DNA into the mouse are either through pronuclear injection, or use of embryonic stem cells.

In pronuclear injection the foreign DNA is injected into the pronucleus of a mouse egg, which forms just after it has been fertilized. The foreign DNA integrates into the genome at a random position, usually after the first one or two cell divisions have  occurred. This means that the mouse will not carry transgenic DNA in all of its cells, and so will only be partially transgenic. The transgenic eggs or sperm from these mice are then used to create the next generation of fully transgenic mice.

When DNA is introduced into embryonic stems cells it usually integrates randomly into the genome, but if it has a similar structure to an existing part of the genome it can be ‘recognised’ by the DNA – so that it undergoes homologous recombination, and a single copy becomes integrated into the genome at a specific location. These embryonic cells then need to grow, and are injected into a host embryo, becoming part of the mouse which grows from that embryo. The mouse grown from the host embryo is known as a chimera, and is formed from the embryonic cells of two different mice. Some of the sperm produced by the chimera will be transgenic – containing the foreign DNA, and when these sperm fertilise a normal egg, the mouse which grows from it will be fully transgenic with foreign DNA in every cell.

– Large mice, with a rat hormone gene which makes them grow bigger than usual, and are used to study growth and development.
– Oncomice, have an inactivated oncogene, and are predisposed to developing cancer. These mice have been vital to the understanding of many cancers and the development of technologies to treat them.
– Doogie mice show improved memory and capacity for learning. These mice have enhanced function at NMDA receptors, which are needed for the brain to store new information.

The more recent development of knock-out (or knock-in) strains of mice during the 1980’s was a major advance for genetics. This technology allows particular genes on the DNA strand to be altered, usually removed, but they may also be inactivated or inserted. This allows researchers to determine the exact function of a particular gene, and these GM mice have provided excellent models of many human diseases, which could not be studied in animals before. The sequencing and analysis of the mouse genome has allowed many genes to be targeted and studied using this technology. The creators of the first knockout mice were awarded the 2007 Nobel Prize in medicine.

The background to gene-targeting

The technique which led to the creation of knockout mice was developed in bacteria by Joshua Lederburg, who received the Nobel Prize for his discovery in 1958. He discovered that bacterial strains could be crossed to give offspring with their own unique genetics, similar to sexual reproduction. This meant that when x-rays were used to produce mutations in their genetic structures, these changes could be passed on. Lederburg was first to describe the process of homologous recombination in bacteria, where chromosome pairs exchange genetic material, and found that during recombination, other pieces of genetic material in the bacterial body could be integrated into the genetic structure.

Two scientists in the USA, Mario Capecchi and Oliver Smithies were both working on ways to alter specific sequences on the mammalian genome. They both realised independently that Lederburg’s technique could be used to introduce mutations into mammalian genes. Meanwhile, Martin Evans work on embryonic stem-cells provided a means to introduce the mutations into a living animal by altering the stem-cells, and then injecting them into a fertilized mouse egg.

Knockout and knock-in mice are produced by gene-targeting. This technique allows a specific gene on the mouse genome to be altered, by replacing it with a similar genetic sequence which has been modified to contain a mutation. The mutation often prevents the gene from functioning. When genes are knocked-in a mouse gene is often replaced by a similar gene from the human genome.

The mutant gene is created in a bacterial plasmid, which is injected into mouse embryonic stem cells, usually from a male mouse. These cells are from a very early mouse embryo, and will divide to form every type of cell in the body. The aim is for the mutant genetic material from the plasmid to form DNA in the sperm of the mouse when it is fully grown. Once the plasmid is inside a stem cell the two similar DNA sequences exchange genetic material by homologous recombination, which swaps the new, mutant-gene into the mouse genome. These stem cells are then implanted into a host embryo to grow. Mice with different coloured fur are usually selected as the hosts, so that it is clear which mice have the mutant genes.

When the mouse is born, it will be a chimera, as only some of its cells will be modified. This mouse will have fur of both colours. When sperm from the chimeric mouse fertilise a normal egg, some of its offspring will carry a single copy of the mutant gene. These mice will have the same coloured fur as the mouse whose DNA was altered originally.

Inbreeding between these mice gives offspring with two copies of the mutant gene. These are knockout mice.

There are many examples of knockout mice, as this technique has been used to study all aspects of physiology and to create models for many human diseases.

– Fat mice, prone to obesity due to a carboxypeptidase E-deficiency.
– Strong mice, with a disabled myostatin gene.
– Cold-tolerant mice, lacking a sodium channel which causes pain when exposed to cold.

It is difficult to track where bacteria spread to during infections. Tagging the offending bacteria with a light source allows them to be seen as the infection progresses. 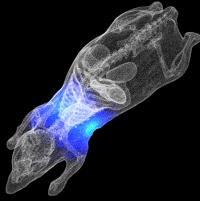 The solution to this problem comes from an unlikely source.  Many organisms, such as fireflies and angler fish can produce light using an organic reaction known as bioluminescence.  The genes which encode this trait can be incorporated into Streptococcus pyogenes, making it bioluminescent.

This bioluminescent Streptococcus pyogenes emits light while it causes infection in a mouse. When such a mouse is placed in a dark box under a sensitive camera, a picture can be taken of the light coming from the bacteria. This picture can be used to see where the bacteria are in the mouse during an infection and what triggers bacterial spread. This model will enable new insights into where and how bacteria spread during an infection, and hopefully enable us to design better treatments and vaccines.ANCHOR