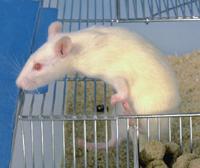 It is difficult to know whether animals suffer with psychiatric diseases like depression, so researchers aim to develop methods that examine specific aspects of the human disease. Diagnosing depression in humans uses a process of detailed questionnaires to determine the changes in the person’s mood, motivation and the impact these have on their daily lives. This is clearly impossible in animals, and since depression is frequently studied in rodent species, signs and symptoms that might be common to a depressed state in any species have needed to be identified.

In animal studies, the researcher utilises the natural behaviour of the animal, such as how much they explore a novel environment. Drugs which improve the symptoms of depression in patients have also been shown to make the rats or mice more likely to explore a novel environment. This provides a way to test new drugs and compare findings with known antidepressants. Traditionally rats have been used in animal studies with behavioural components, and the majority of documented animal studies of depression concern rats. However, the ability to manipulate mice genetically means that their use is increasingly favoured in all aspects of biomedical research.

In depression, patients tend to feel negative about things in their lives and often find it difficult to see positive outcomes. This is something that can also be tested in rodents by measuring aspects of reward and motivation in tests such as the sucrose preference test, probability learning, cognitive bias test. The Porsolt forced swim test measures the length of time a rodent is prepared to swim for, with no apparent means of escape or reward. This test is also known as the despair test, and very low motivation to swim is a reliable model of many features of human depression.ANCHOR ANCHOR

Animal research into psychiatric disorders has also been very important to help us understand the way that different parts of the brain and different chemical messengers function. Studies in the normal brain provide information that enables researchers to understand what goes wrong in the diseased brain.

Rats and mice are used to directly examine the effects of drugs on the levels of neurotransmitters in particular brain regions through the use of in vivo microdialysis, which allows direct sampling of brain fluid between cells. Rodents are also used to look at the docking molecules or receptors that interact with the chemical signals to induce changes in the way the brain functions. These studies can use imaging techniques similar to those used in humans such as PET scanning. Alternatively, post mortem techniques can be used, for example, receptor autoradiography is used to show the precise location and activity of neurotransmitter receptors through the use of radioactive labels.

Much of the research carried out today focuses on understanding which parts of the brain go wrong and why this happens, providing the necessary knowledge base from which new drugs can be developed.

Non-human primates have been and are still used in this area but the numbers are very small when compared to the number of rodents used. Rats and mice are used the most but a small number of studies may use guinea pigs, gerbils, hamsters and tree shrews.ANCHOR ANCHOR