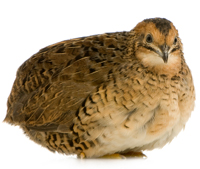 Over the last 50 years quails have proved research animals. The most commonly used is the Japanese quail, Coturnix japonica. It’s relatively short lifespan and physiological similarities to humans make it useful in the study of aging and disease while its 16-day developmental period and easily accessible embryo make it a suitable model for developmental biology.

The Japanese quail is considered a separate species from the common quail, Coturnix corturnix which is found throughout Europe, Asia, Africa and India, and is not a close relative of either the American bobwhite quail, Colinus viginianus or the Californian quail Lorphortyx california. The species is thought to have developed through the domestication of the common quail in China during the 11th Century, and to have been brought to Japan in the 12th Century, where they were bred as domestic songbirds. During the 1900s quails were bred in Japan for their eggs and meat, and while these strains were largely lost during the Second World War, new domesticated lines have been re-established, and are now used in laboratories all over the world.

C japonica was first described as a research model by Padgett and Ivey in 1959ANCHOR, who saw it as a practical animal for the study of development. In 1961 they published a detailed developmental atlas of the quail, charting the stages of quail development. There are now detailed studies of quail histology, anatomy and breeding that provide reliable reference texts for researchers, and the Japanese quail has become a common laboratory species. The American bobwhite quail is also frequently used in toxicity studies, particularly of chemicals which are intended for use, and which will therefore have environmental impact in North America.

Unlike rodents, avian embryos can be easily studied and manipulated as they grow by removing a small section of the eggshell. This has made it possible to follow their development using time-lapsed video-microscopy, and watch the embryo as it growsANCHOR.

The chicken and quail are both warm-blooded vertebrates which develop similarly to humans. The early development of quails is very like that of chickens, but the nucleus of quail cells contains condensed heterochromatin (a portion of the material making up the chromasomes) which is not found in chicken cells. This fundamental difference in makeup can be used to distinguish between tissue from the two species when tissue is transplanted between developing quails and chickens, to create a quail / chicken chimera. It has made the quail / chick chimera a successful model for determining the fates of particular cells as they developANCHOR.

The quail has recently been used as a successful transgenic model for the production of a transgenic bird. A transgene coding for a green fluorescent protein maker was introduced into freshly laid eggs, which were then incubated until hatching. The fluorescent protein was visible in the offspring for several generations, showing that the new gene had been successfully introduced into the birdsANCHOR ANCHOR. The quail is a suitable species for creating transgenic birds. It has a  hardy embryo, which survives the introduction of the new transgene well.

Quails are often used in environmental toxicity testing. They eat many kinds of seeds and are used in palatability studies, which show the likelihood of, for example, a new pesticide, being eaten by birds. These birds also eat a variety of worms and insect larvae, and may be used to study the potential effects of a chemical substance on the food chain.

Their eggs can be grown in large batches in incubators, and allow the effects of particular substances on embryonic development to be studied. They are important models for reproductive studies that look at the effects of chemicals on the environment.