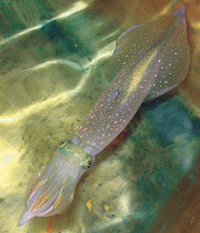 Squid have been used since the 1930s to study the properties of nerve cells, and have contributed to our understanding of the nervous system. The giant axon of the squid is the largest known nerve cell in the animal kingdom. They can be up to 1mm in diameter and almost a metre long. The axon is part of the squid’s propulsion system, and runs from the ganglion to muscles carrying signals which control and co-ordinate movement. The squid’s mantle cavity is usually filled with sea water, but a co-ordinated contraction of the muscles acts as a jet propulsion system, forcing the water out and propelling the squid through the water at up to 10 m/s.

Squid are molluscs with a highly developed sensory and nervous system, including complex eyes and brain. Despite the obvious differences between squid and humans, the assumption that our nervous systems function in the same way has allowed enormous advances in our understanding of neurophysiology.

Their nervous systems were first studied by zoolologist John Zachary Young and physiologist Kenneth Cole during the 1930s. At that time the electrical signals of the nervous system were studied using frogs, or crabs, but the giant axons of the North Atlantic squid Loligo pealeii, are 50 times the diameter of axons in the common crab and 1,000 times those found in humans. Their size allowed electrodes to be placed inside the axon, so that recordings could be made simultaneously inside and outside the cell, measuring changes in current flow across the cell membrane when the nerve fired.

This work inspired Hodgkin and Huxley’s famous experiments on the giant axons of L pealeii at Plymouth marine laboratory in the UK. They showed how the movement of ionic charges across a cell membrane causes an electrical signal which travels through nerve fibres. They received the Nobel Prize for this work, which forms the basis of modern neurophysiology, in 1963.

It can take years to deliver a catch of the squid, which cannot be kept or bred in captivity and rarely come close to shore. From 1962 when the Laboratory of Cell physiology opened in Montemar, Chile, electrophysiologists also studied the Humboldt squid Dosidicus gigas, one of the largest species in the world and twice the size of North Atlantic squid. Although the invention of 'patch clamp' has allowed electrophysiologists to work with mammals, the squid remains the best model for many studies of the nervous system.

The transport of molecules from the cell body of a neuron down the axon is crucial to the function and survival of the cell. Research on transport in the axons of L pealeii has shown that biological material is loaded and directed to its target location by a single peptide. This peptide forms part of the amyloid precursor protein, which is thought to play a role in Alzheimer’s disease.

The amyloid precursor protein (APP) is a component of the plaques which form in the brain during Alzheimer’s disease. Mutations in this protein are known to lead to early onset Alzheimer’s, but relatively little was known about its role in healthy cells. To test the role of APP in axonal transport, Elaine Bearer at Brown University coated fluorescent micro-beads with the different peptides which make up APP and injected them into a giant squid axon.

The large axon in squid can allow researchers to see cell components move, and material within the axon can be manipulated, while the processes involved in  transport are still intact and operating. After experimenting with seven different peptides, one: APP-C, made the beads move down the axon to the synapse. APP-C in squid is almost identical to the equivalent peptide in worms, fruit-flies and humans, so it is likely that it plays a similar role in neuronal transport in all animals.

APP-C could be used as a tag to transport medicines to synapses, in diagnostic studies to determine how much transport has been disrupted in dementia and may be a drug target for Alzheimer’s, Huntingdon’s and other diseases where nerve transport breaks down.

Structure of the squid rhodopsin

Squid have excellent vision, which they rely on to catch their prey. Rhodopsin is a protein found in the membrane of light-detecting photoreceptor cells in the retina. The retina of squid shares many common features with those found in the eyes of humans and other mammals. When light hits the photoreceptor cells rhodopsin changes shape, and is then able to activate a G-protein, triggering biochemical changes within the cell.

The structure of this messenger protein, and the biochemical changes which it triggers in squid are different to those which have been studied in vertebrates. The protein which is activated is similar to proteins which are used as biochemical messengers by many hormones and neurotransmitters in humans. This type  of protein is a target for many drugs such as anti-histamines, but their precise structure has never been clear before.

The crystal structure of squid rhodopsin shows in detail how the protein is able to change shape, and its similarities and differences from vertebrate rhodopsins which have been studied. It shows how rhodopsin absorbs light, and the maximum that it can absorb. The structure will also be useful for helping to design drugs which affect this type of receptor.

This research will be particularly useful for researchers studying human melanopsin, another photoreceptor which is responsible for setting our biological clock and for the reflex of our pupils. Melanopsin is more closely related to the squid rhodopsin than to vertebrate rhodopsin found in humans.

This research will be particularly useful for researchers studying human melanopsin, another photoreceptor which is responsible for setting our biological clock and for the reflex of our pupils. Melanopsin is more closely related to the squid rhodopsin than to vertebrate rhodopsin found in humans.