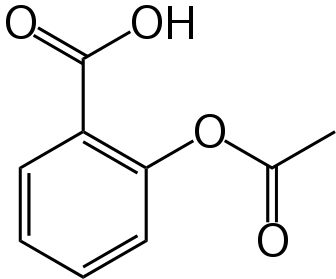 Aspirin, also known as acetylsalicylic acid (ASA), is a salicylate medication. It works by reducing substances in the body that cause pain, fever, and inflammation. Aspirin is one of the most widely used medications in the world with an estimated 40,000 tonnes of it being consumed each year. It is on the WHO Model List of Essential Medicines, the most important medications needed in a basic health system.

The therapeutic properties of willow tree bark have been known for at least 2,400 years, with Hippocrates prescribing it for headaches. Salicylic acid, the active ingredient of aspirin, was first isolated from the bark of the willow tree in 1763 by Edward Stone of University of Oxford. Felix Hoffmann, a chemist at Bayer, is credited with the synthesis of aspirin in 1897.

Aspirin is part of a group of medications called nonsteroidal anti-inflammatory drugs (NSAIDs), but differs from most other NSAIDs in the mechanism of action. The salicylates have similar effects (antipyretic, anti-inflammatory, analgesic) to the other NSAIDs and inhibit the same enzyme cyclooxygenase (COX), but aspirin does so in an irreversible manner.

Aspirin is used to treat pain, and reduce fever or inflammation. It is sometimes used to treat or prevent heart attacks, strokes, and chest pain (angina) and may be effective at preventing certain types of cancer, particularly colorectal cancer. Aspirin also has an antiplatelet effect by stopping the binding together of platelets and preventing a patch over damaged walls of blood vessels.