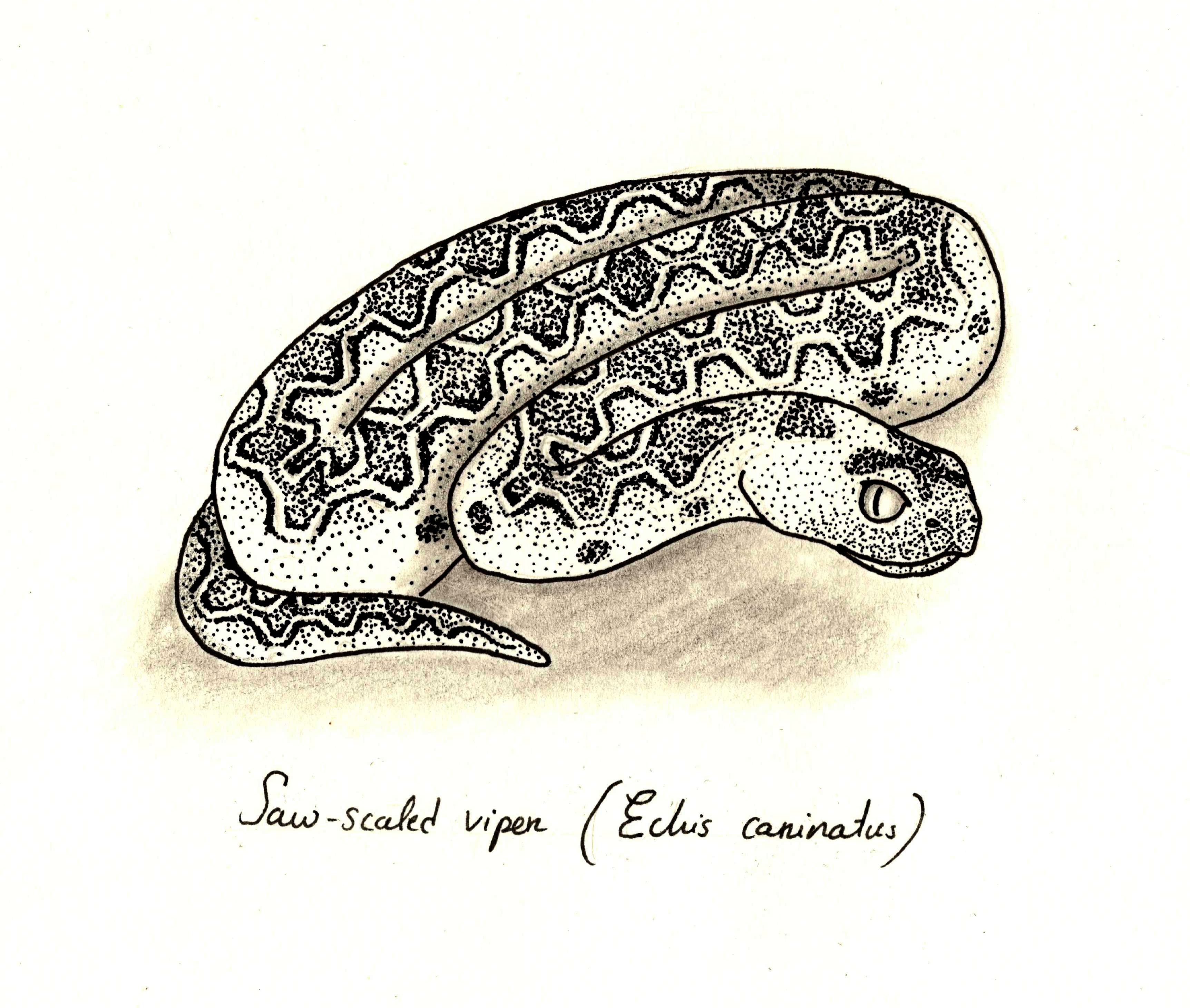 The saw-scaled viper (Echis carinatus) is a venomous viper that lives in parts of the Middle-East and Central Asia. It is the smallest member of ‘the Big Four’ snakes – the four species of snake that cause the most deaths annually. The venom yield from individual specimens varies considerably, as does the quantity injected per bite. The mortality rate from their bites is about 20%, but due to the availability of the anti-venom, deaths are currently quite rare. The viper’s potent venom has been such a medical problem that doctors have produced nine different antivenoms that target it.

Within minutes of the bite, localised swelling and pain which later spread can be felt.  Haemorrhage and coagulation defects follow closely, which may lead to hypovolemic shock. The most dangerous symptoms of envenomation are blood-clotting trouble and internal bleeding, which can lead to acute kidney failure.  Almost all patients develop oliguria or anuria within a few hours to as late as 6 days post bite. Antivenin therapy and intravenous hydration within hours of the bite are vital for survival.

The blood-thinning venom from this species is used in the manufacture of several drugs.

One is called echistatin, which is an anticoagulant and a potent inhibitor of bone resorption. Even though many other snake venoms contain similar toxins, echistatin is not only especially potent, but also simplistic in structure, which makes it easier to replicate. Indeed, it is obtained not only through the purification of whole venom, but also as a product of chemical synthesis.

Another drug made from E. carinatus venom is called ecarin. Ecarin is an enzyme derived from the snake venom that is the primary reagent in the ecarin clotting time (ECT) test, which is used to monitor anticoagulation during treatment with hirudin – an anticoagulant medication which was originally isolated from leech saliva.

Tirofiban, is an antiplatelet drug derived from an anti-clotting protein found in snake venom. It blocks the same receptor that plays an important role in the aggregation of platelets as the drug Eptifibatide. Tirofiban is indicated to reduce the rate of thrombotic cardiovascular events in patients with non-ST elevation acute coronary syndrome