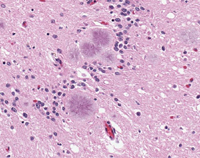 Animal models and animal experiments are crucial in understanding the transmissible spongiform encephalopathies (TSEs) - scrapie in sheep, BSE in cattle, and CJD in humans. These diseases are caused by abnormal versions of prion proteins in the brain. These are not broken down and they also convert normal prions to the abnormal version. The resulting accumulation of abnormal prions and loss of normal prion function are thought to cause brain damage.

Key areas of current research involving animal testing (mainly mice) relate to early diagnosis of these conditions, study of how the diseases progress, how they are transmitted within and between species, establishing safety limits, and developing therapies.

The similarity of symptoms and brain pathology in vCJD patients and in animals with BSEANCHOR ANCHOR, suggested a link between these two diseases. Further evidence came from animal experiments using mice. Mice injected with prions from BSE infected cows or with prions from patients with vCJD showed the same pattern of brain damageANCHOR. This led to the conclusion that the disease known as vCJD was a human form of BSE.