Cervical cancer kills more women worldwide than any other type of cancer apart from breast cancer. It accounted for nearly 275,000 deaths and about 530,000 new cases in 2008, according to the International Agency for Research on CancerANCHOR. It is usually triggered by the human papillomavirus (HPV), one of the world’s most common virus groups. There are more than 100 different types of HPV, including 30 that are sexually transmitted.

Many animal species, from birds to whales, are also susceptible to papilloma infection. The cottontail rabbit papillomavirus (CRPV) was the first animal model of cancer caused by a mammalian virus. Fortunately – for research into human disease – animal and human papillomaviruses have strong similarities. 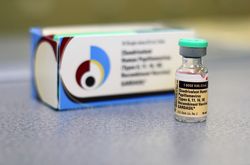 CRPV played a critical part in the development of vaccines against cervical cancer because HPV could not be replicated in cell culture, nor could it be transmitted to other animals. The fact that fully infectious HPV induces cancer ruled out direct human experimentation. Using CRPV, canine oral papillomavirus and BPV (bovine papillomavirus) researchers found that, whichever animal was used, it was possible to protect against infection by papillomaviruses. Thus they could stop the development of papillomas or cancer through various modes of immunisation.

Richard Shope of the University of Rochester actually discovered CRPV in 1933. Alerted by a friend to cottontail rabbits with ‘horns’ (which were actually large warts), Shope ground up the horns, filtered them through porcelain that let only tiny virus-sized particles through, and injected the filtrate into other rabbits. In turn these rabbits grew hornsANCHOR.

Two years after Shope’s discovery, his Rochester colleague Dr F Peyton Rous described the progression of papilloma warts into cancer in animal experimentsANCHOR. Rous is famous for an earlier study in 1910 with chickens which established the first link between tumours and virusesANCHOR.

This groundbreaking work initially attracted little interest. The prevailing attitude was that animal cancers bore little resemblance to human cancers and that viruses could not transmit them. Rous was eventually vindicated and won a Nobel Prize in 1966 for his early discovery. Nonetheless, Dr Saverio Campo, of Glasgow University, noted in 2002 that it still took "a paradigm shift in the late 1970s for some viruses to be recognised as 'tumour viruses' in humans"ANCHOR. In 1977 a German researcher, Dr Harald zur Hausen, published the first research linking the papilloma virus to cervical cancerANCHOR, but his views – like those of Rous before him – were initially discounted. His controversial hypothesis finally turned into experimentally proven certainty in the early 1980s when he and his team isolated two previously unknown virus types, HPV-16 and HPV-18, from tumour tissueANCHOR. Just like Rous, zur Hausen went on to be awarded the Nobel Prize for his discovery.

Why did it take so long to confirm HPV as a cause of cervical cancer? One important discovery was that the virus did not always cause cancer. Here again there was an important clue in animal research and animal testing. For example, BPV had been known for many years to cause cancer in cattle, but only in those that also ate bracken. In women, HPV also needs some kind of ‘push’ or ‘help’ to trigger cervical cancer. About half of sexually active women are estimated to be infected with HPV yet only a very small proportion of these develop cervical cancer.

This is partly because only certain HPV types are dangerous. There are more than 100 different types, but types 16 and 18 are responsible for 70% of cervical cancer. However, not all women infected by types 16 and 18 develop the disease. Some women shake off HPV infection altogether, perhaps because of a genetic predisposition or perhaps because they have fewer risk factors than other women. Risk factors include smoking, a poor diet and a weakened immune system.

It is easy to see therefore why the primary cause of cervical cancer eluded science for so long. In 2002, Dr Campo also noted that the World Health organization did not officially declare that HPV-16 and HPV-18 were carcinogenic (cancer causing) until 1995. Animal papillomavirus studies, he added, were “a determining factor” in that decision.

In 1937, Shope observed that rabbits that overcame a papillomavirus infection were immune to reinfection. This raised hopes that a vaccine would be possible. Most vaccines work by exposing the immune system to a weakened or killed version of the virus, but this would not work for HPV. Laboratory tests showed that even the presence of HPV DNA could be enough to trigger cancer, so the virus could be dangerous even if it was killed. In the 1990s scientists managed to get around this by producing copies of the virus’s outer shell that could mimic the virus.

Since HPV can only infect human cells, the vaccine had to be tested using other animal papillomaviruses. Species-specific vaccines were created for rabbits, cows and dogs – they all promoted high levels of antibodies and were over 90% effective against their target virusANCHOR. The human vaccine was tested on monkeys, which produced high levels of antibodies also, but the effectiveness could not be checked as the virus could not infect them.

There are now two vaccines against both HPV-16 and HPV-18 available on the market: Gardasil and Cervarix. Since 2006, these have been given to young females in a number of countries. The vaccines are only effective before being infected by HPV and so are targeted at girls before they become sexually active. Through this vaccination programme, the prevalence of HPV-16 and HPV-18 has decreased by 56% among 14-19 year old females in the United StatesANCHOR. This is despite only a third of girls aged 13-17 having received the vaccine; it is estimated that raising this to 80% would prevent 4,400 cases of cervical cancer each year in the futureANCHOR.

Women may have their uterus removed as part of treatment for cervical cancer, leaving them unable to give birth. Following successful transplants in mice, sheep and baboons, uterus transplants have been attempted in women11. While the tranplants have been successful, there have yet to be any children born through this method. In 2014, it was announced that nine women in Sweden had received uteri, and doctors were awaiting results of IVF (in vitro fertilisation) treatmentANCHOR. IVF is still required because the uterus is not connected to the fallopian tubes, so the women cannot conceive naturally.