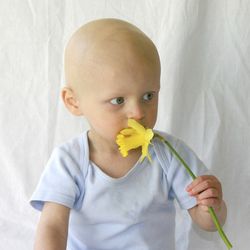 Leukaemia (or leukemia) is a form of blood cancer caused by the abnormal growth of blood cells. It is commonly associated with children, as it is one of the few cancers that are regularly seen at this age, although leukaemia is far more common in the elderly. Approximately 350,000 people are diagnosed with leukaemia each year, with 250,000 deathsANCHOR.

Most leukaemias are either myeloid or lymphocytic/lymphoblastic, which respectively affect the myeloid cells, which produce red blood cells, and the lymphoid cells, which produce white blood cells. Both types can be either acute, where a rapid increase in abnormal, immature white blood cells crowd out normal blood cells in the bone marrow, or chronic, where the build-up is slower and consists of mostly mature blood cells. The most common forms are acute myeloid and chronic lymphocytic, each accounting for roughly 30% of cases. Approximately 17% of leukaemias do not fit into this categorisation.

Unlike most cancers, leukaemia often arises from well-understood, relatively simple genetic mutations. This has allowed researchers to develop treatments that have dramatically changed the fate of patients, although this varies significantly depending on the type of the disease.

The five-year survival rate for AML in people over 65, the most common demographic, is less than 10%. It is similar to solid cancers, such as breast or colon cancer, in that each person and even each cell hosts a different combination of dozens of mutations. It is this diversity that has made AML so difficult to treat relative to other leukaemias.

Now, researchers are working on a very different way of targeting the cancer. Since the 1960s scientists have noted that there are odd patterns of DNA methylation in leukaemia patients. Methylation is the process of adding a chemical tag, known as a methyl group, onto DNA. This can have a major effect and effectively controls whether a gene is switched on or off. This is a form of control known as epigenetics.

In 2004, the first drug to work epigenetically was approved to prevent leukaemia in patients with myelodysplastic syndrome, a non-aggressive cancer that progresses to AML in a third of casesANCHOR. 5-azacitidine (Vidaza) and decitabine (Dacogen) both interfere with DNA methylation.

In an attempt to find other targets for similar epigenetic drugs, researchers screened a library of RNA molecules designed to block the activity of epigenetic regulator proteins in a mouse model of AMLANCHOR. They discovered that one protein in particular, Brd4, was critical in maintaining the cancerous cells. A drug previously developed to block Brd4, JQ1, was used to show that it could be effective against a range of subtypes of AML. Brd4 works by ‘reading’ epigenetic marks known as acetyl groups and providing feedback to other proteins working to regulate DNA.

The genome of a patient with AML was sequenced for the first time in 2008, raising hopes for future targeted therapies. Since then, developments in sequencing technologies have greatly increased this potential. In 2013, researchers published results of sequencing DNA of 200 adults with AMLANCHOR. This revealed that more than three-quarters of them had a harmful mutation in an epigenetic enzyme. These enzymes are responsible for applying and removing chemical tags from DNA and DNA-associated proteins, through which they control expression and silencing of genes. Several of these enzymes, including DNMT3A, IDH1, IDH2, DOT1L and TET2, are now targets for drugs in development.

In 1960, researchers discovered that 95% of patients with chronic myeloid leukaemia (CML) have a chromosomal abnormality in the cancerous cells. This has since been known as the Philadelphia chromosome, named after the city in which it was discoveredANCHOR. It was later revealed that this was the result of parts of chromosomes 9 and 22 swapping places, which fuses two genes together known as BCR and ABLANCHOR. It was unclear whether this was caused by the cancer or a cause of the cancer until researchers inserted the BRC-ABL fusion gene into mice and saw that it led to a CML-like diseaseANCHOR ANCHOR ANCHOR ANCHOR. This led to work in trying to inhibit the activity of this gene.

An inhibitor, later known as imatinib, for BCR-ABL was developed in 1996 following successful tests in cell cultures and miceANCHOR. Early clinical trials showed it to be a remarkable drug, causing complete remission in all patients. Imatinib was approved in 2001 and sold under the tradename Gleevec or Glivec. This was a turning point in CML treatment and the lifespan of patients has risen from 5-6 years to 10-20 years through imatinib and similar drugs.

Although imatinib is very effective, resistance is often a problem. Even at early stages in the disease, there can be a lot of genomic instability, which helps new mutations to form. Studies in mice suggest that the BCR-ABL protein itself promotes this instability ANCHOR. After eight years, about half of patients will have moved onto another drug after imatinib has become ineffectiveANCHOR.  Fortunately there are several alternatives, including dasatinib, nilotinib, bosutinib and pontinib (approved in December 2012), which can get around several resistant mutations.

Acute lymphoblastic leukaemia (ALL) occurs mostly in children and accounts for 75% of childhood leukaemia cases. In the 1970s it killed around two-thirds of child patients ANCHOR, but as of 2005 ninety per cent of children under 15 are curedANCHOR.

Aminopterin was introduced in 1948 and became the first known compound to inhibit the growth of cancerANCHOR. It was able to cause temporary remissions in ALL in children. Aminopterin is an antifolate, which means that it blocks the metabolic pathways that use B9 folate vitamins. This particularly slows growth of bone marrow and in doing so the leukaemia goes into remission.

A year after aminopterin was demonstrated, a similar antifolate called methotrexate was shown to produce a drop in white blood cells in ratsANCHOR and prolong survival in mice with leukaemiaANCHOR. This later replaced aminopterin as the drug of choice, after tests in mice showing that it had fewer side effects than aminopterinANCHOR.

About 20% of ALL patients have the Philadelphia chromosome and so can also be treated with imatinib and similar drugs.

Patients are usually treated with chemotherapy to force the cancer into remission, which greatly reduces the number of cancer cells in the body. However, even a few cells remaining can allow the cancer to return. High doses of chemotherapy or total body irradiation will help to destroy nearly all of the cancer cells, but can also wipe out the haematopoietic stem cells in the bone marrow that produce blood cells. This has to be followed by a stem cell or bone marrow transplant from a donor in order to replace the lost cells.

A bone marrow transplant was used to cure leukaemia in 1985 for the first time. Since then, research has allowed bone marrow and stem cell transplants from donors who are not perfect matches to the recipient, which has greatly increased the opportunity for this therapy.

Development of hematopoietic stem cells is dependent on blood flow as shown after tests in zebrafish. Researchers tested over 2000 drugs on zebrafish to check their effects on stem cells development and found that those affecting blood flow increased productionANCHOR. Later research showed similar effects in mice and were able to test this by flowing liquids over stem cells in cell cultures. It is hoped that these drugs could be used to aid recovery in patients receiving stem cell transplants.

CLL can be treated with chemotherapy and monoclonal antibodies. It has a five-year survival rate of about 80%.

Some of those most exciting recent advances have been through reprogramming the patient’s T cells to attack and destroy the cancer. A sample of T cells can be genetically modified to produce a chimeric antigen receptor (CAR) that allows them to replicate rapidly in the body and target B cellsANCHOR ANCHOR. This receptor consists of an antibody, derived from a mouse monoclonal antibody, designed to recognise B cellsANCHOR. This destroys all of the patient’s B cells, both healthy and cancerous, which has serious side effects but also dramatic results in treating cancers that have resisted chemotherapy. Currently this is only available in small trials, and a key difficulty will be to scale it up to reach more patients.

This technology has developed over several decades from modifying mouse hybridoma cellsANCHOR ANCHOR to being able to modify the T cells taken from a mouse or a patientANCHOR ANCHOR. The first demonstration of human CAR T cells shrinking cancer was done in mice in 2002ANCHOR. It has since shown positive results in clinical trials for patients with CLLANCHOR, and has since also been used to treat relapsed ALL patientsANCHOR.