Five thousand people in the UK have motor neurone disease (MND), known in the US as amyotrophic lateral sclerosis, ALS, and Lou Gehrig's disease (after a legendary baseball player of the 1930s). Two people get it every week in the UK, and most of them survive for only 2-5 years. It affects motor neurons (nerve cells), which control movement. There are several forms of the disease and although the causes are unknown, a number of ways in which motor neurons can be affected have been identified since 1992, and these have been studied in rats and miceANCHOR ANCHOR.

Approximately 10% of cases of MND are inherited and researchers have identified a dozen different genes that are associated with the diseaseANCHOR. Many of these genes have been identified through research on animals.

Strains of mice with a genetic form of the disease, either naturally occurring or genetically engineered, have improved our understanding of the disease and enable potential therapies to be tested. In 2002 scientists made transgenic rats with MND, which carry an abnormal human gene for an enzyme called superoxide dismutase (SOD1)ANCHOR. Faulty SOD1, caused by a number of different genetic mutations, is at the root of one-fifth of inherited MND cases.

The SOD1 mutation affects astrocytes, specialised non-neuronal brain cells, which then cause damage to previously healthy adjacent motor nervesANCHOR. The mutant enzymes work by migrating to the powerhouses (mitochondria) of the spinal cord neurons and killing them from withinANCHOR. SOD1 mice are now a standard experimental model for MND and most treatments will be tested on these mice before progressing into clinical trials. 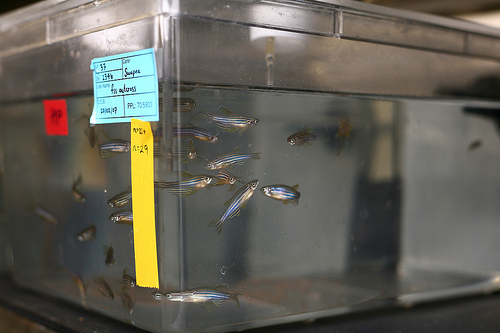 Scientists have also developed a model for motor neuron disease in zebrafish. These are particularly interesting because of their ability to regenerate neurons, unlike humans. In 2013, researchers discovered that neuron regeneration in zebrafish relies on the hormone dopamineANCHOR. The transparent embryos of zebrafish offer the opportunity to view neurons developing under a microscope.

Genetic screening of zebrafish in 2012 led to the discovery of a gene, EPHA4, which influences the effects of MNDANCHOR. By stopping, or slowing down the activity of EPHA4, researchers led MND zebrafish and rodents to live longer. The researchers also discovered two human MND patients with mutations in their EPHA4 genes who had survived with MND for longer than expectedANCHOR. While this does not seem to reverse damage in mammals, it appears to slow the rate of decline making it a therapeutic target of interest.

In 2003, mutations in the gene encoding proteins known as dyneins were shown to produce MND-like symptoms in mice. Dyneins are responsible for transporting several different large objects around the cell and could help to explain the molecular basis for MNDANCHOR. Also, in 2003 it was found that a strain of MND mice called mnd2 had a mutation in a gene that codes for an enzyme called OmiaANCHOR, and this might provide a clue to some forms of the human disease.

One way that motor neurones can be damaged and destroyed became clear during the studyANCHORof a new strain of mouse carrying a gene (NF-H) that causes nerve cells to produce too many filaments. Many MND patients carry a similar NF-H gene. The mice show characteristics of MND, and it is thought that the excess filaments cause MND by consuming excessive amounts of the nutrients required to keep nerve cells alive. These strains therefore make good models of this disease.

A gene for another growth factor, called VEGF, protects against MND in humans, and when it mutates, it results in an increased risk of developing the disease. VEGF protected mice with damaged motor nervesANCHOR and VEGF suppression in mice resulted in deterioration similar to that seen in human MNDANCHOR.

In 2004, scientists bred a mouse with a form of MND called spinal and bulbar muscular atrophyANCHOR; the mice had abnormal androgen receptors, which interfered with VEGF, confirming the role of this growth factor in the disease. Shortly afterwards, it was shown that a single injection of a virus carrying a gene for VEGF delayed onset and slowed progression in MND mice. It also increased survival without any apparent adverse effectsANCHOR.

In 2013, human stem cells were injected into rats with MND to secrete VEGF and GDNF, another growth factor, which slowed the progression of the disease and prolonged lifespanANCHOR. The cells only survived for 9 weeks and did not form new neurons, but were specifically used as a delivery system for these growth factors.

Inhibitors of an enzyme called caspase have prolonged the life of mice with NMDANCHOR. There are 14 different caspases, and they play a key role in programmed cell death. While blocking all of them may have undesirable effects, blocking the function of one particular caspase improved the survival of MND mice from an average of 25 days to 35 daysANCHOR.Treatment with other enzymes called catalases has increased the survival of MND miceANCHOR.

The drug known as Riluzole is current the only therapy available for MND. Although it is known to affect neurotransmission, its precise mechanism is still not entirely understood. Its neuroprotective effects were initially tested in rodentsANCHOR.

About 20% of hereditary cases of MND are caused by a mutation that disrupts the heat shock response, a mechanism that protects cells from stress. A drug called arimoclomol improves muscle function in mice bearing this mutation and prolongs lifespanANCHOR. This is now in phase II/III clinical trials, due to end December 2013, for MND patients with a SOD1 mutationANCHOR.

Another drug, known as Ozanezumab, is currently in Phase II clinical trials. This targets Nogo-A, a protein that blocks nerve cell regeneration. Researchers previously found that mouse models and humans with MND have higher levels of Nogo-A in their muscles, and that levels of Nogo-A correlate with the severity of the conditionANCHOR.

Inflammation is notable issue in MND, as well as in Alzheimer’s disease, Parkinson’s disease and multiple sclerosis. Research on SOD1 mouse models of MND has shown that immune system cells have an influence on the progression of the condition. A new drug, NP001, which alters the behaviour of macrophages to reduce inflammation in the brain has passed phase II clinical trials, which show that it is safe and well tolerated, and will be run through phase III trials in late 2013ANCHOR.

Human umbilical stem cells, taken from the placental cord following birth, migrate to damaged areas of brain and spinal cord in MND miceANCHOR. When human embryonic germ cells were injected into the fluid around the spinal cord of 15 paralysed rats the animals had improved control of their hind legs – but not in the way the scientists had expected. The implanted human cells produced two important molecules: one that improved nerve cell survival, and one that enabled nerve cells to remain in contact with each other. The rats’ own nerve cells were healthier in the animals that received human cells. Most of the implanted cells migrated into the spinal cord, becoming astrocytes and even motor neurons. However, only about four cells per animal became motor nerve cells that extended out from the spinal cord and reached into and controlled muscleANCHOR.