Pacemakers are electronic devices, usually implanted, that provide an electronic signal to regulate the heartbeat. About 10,000 patients benefit every year in the UK from having a pacemaker implanted.

The first pacemaker
Smaller pacemakers for medical use
References 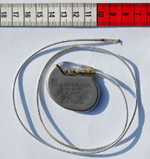 The first cardiac pacemaker was invented by a Canadian electrical engineer, John Hopps, who was researching the effects of radio frequency heating on hypothermia in 1941.ANCHOR He found that if the heart stopped beating when its temperature dropped, that it could be restarted artificially, using mechanical or electrical stimulation to make it beat. This research allowed the development of the first cardiac defibrillation machine, which was used by Hopps to start a dog’s heart in 1949.

In 1950, through research on dogs, Hopps invented the first pacemaker device, which was too large to be used internally.ANCHOR

Smaller pacemakers for medical use

Wilson Greatbatch, an American electrical engineer, invented the first implantable cardiac pacemaker, in 1958. He also invented pacemaker batteries, which were essential to its function.ANCHOR The invention of the transistor meant that the electrodes which the pacemaker relied on no longer used vacuum tubes, and a small device could be used.

In 1984 John Hopps had a pacemaker fitted to regulate his own heart, and received a replacement pacemaker 13 years later. By the mid-80’s fitting cardiac pacemakers had become a routine procedure which saved thousands of lives.