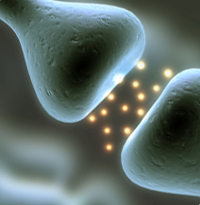 The nervous system allows communication between organs of the body, allowing each separate entity to work together with the others as part of a complete system. It allows the body to receive information about its environment, and is essential to animal life, processing information and sending it from one part of the body to another.

The theory of neurotransmission
Loewi's experiments
The neurotransmitter chemicals
References

The theory of neurotransmission

Early physiologists believed that nerves acted directly on muscles or glands to change their activity, but in 1904 Elliott noticed that some blood-borne chemicals – hormones – had effects on tissues which were very similar to stimulating particular nerves.ANCHOR He noted that the effects of the hormone adrenaline were like those of stimulating the sympathetic nervous system. He proposed that when sympathetic nerves fired they released a neurotransmitter –adrenaline - from their nerve endings, and that it was the adrenaline which affected the body’s organs.

When Henry Dale discovered acetylcholine ten years later ANCHOR, he realised that its effect on the organs of the body was similar to stimulation of the parasympathetic nervous system. In his 1914 paper he speculated that acetylcholine might occur in the body, and what the significance would be if it was found there. ANCHOR

Although neurotransmission was an interesting idea, there was no evidence that nerves functioned in this way until 1921 when Otto Loewi published the first in a series of papers describing his experiments on frogs. ANCHOR These left no doubt that nerve impulses affected the heart using chemical transmission.

Loewi connected a frog’s heart, with the nerves that stimulated it still attached, to a small glass container filled with ringer solution, which filled the heart’s chambers as it beat. Stimulating the nerve fibres electrically, he noted how the number and strength of the heart beats depended on, the stimulation of the individual sympathetic and parasympathetic nerve fibres.

He then transferred the fluid which had been pumped out of the heart into another heart which he had prepared in a similar way. The fluid itself was able to change the activity of the heart, as if it had taken on the properties of stimulating the nerve fibres. This simple experiment showed that the nerve fibres had released substances into the fluid which had an effect on the organ.

Throughout the 1930’s Dale and his colleagues showed that neurotransmission took place throughout the nervous system. Many of these studies were carried out on cats. He developed a new way of classifying nerve fibres and redefined the understanding of how nerves affect the body. Dale and Loewi were awarded the Nobel Prize in 1936.