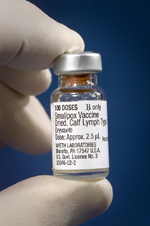 The first vaccine was famously developed by the physician Edward Jenner in 1796. He had noticed that milk-maids had unusually smooth skin, and realised that they were not scarred by smallpox scars. In the 18th century smallpox was a feared disease which killed thousands and left many more disfigured. Jenner also realised that milk-maids had often suffered and recovered from cowpox, a smallpox-like disease which affected cows, but which could also infect humans.

Jenner became convinced that having suffered from the milder disease, cowpox, the milk-maids became immune to smallpox - as if they had suffered from the disease before. He tested his theory, taking a small amount of fluid from a cowpox pustule on a milk-maid's hand, and inoculting a young boy. Jenner founded the principles of vaccination. The cowpox-containing serum which was used for inoculation against smallpox was called vaccinia - from the Latin term for cow.

Vaccination rapidly eliminated smallpox in Europe and the United States, with a massive impact on public health. The more serious strain of the virus, Variola major, has a mortality rate of 20-40%. 1949 saw the last recorded case of smallpox in the USA.

Following intensive efforts by the WHO to irradicate smallpox completely - through a policy of 100% vaccination, smallpox was eventually declared eliminated. The last case of naturally aquired smallpox occured in Somalia on the 26th October 1977.

To-date, smallpox is the only disease to have been completely eliminated through an immunisation programme.