The 2020 Nobel Prize for Medicine was awarded to three scientists who made a decisive contribution to the fight against blood-borne hepatitis, a major global health problem, by identifying Hepatitis C.

Hepatitis, from the Greek words ‘liver’ and ‘inflammation’, was first described as “epidemic jaundice” by the father of western medicine, Greek physician Hippocrates himself, sometime around 400 B.C. Despite the centuries that have passed, this liver disease remains a major global health concern, on the same scale as HIV or tuberculosis.

But for the first time in history, infectious hepatitis can now be treated, cured and vaccinated against, raising hopes of eradicating the hepatitis C virus from the world population and saving millions of lives every year. 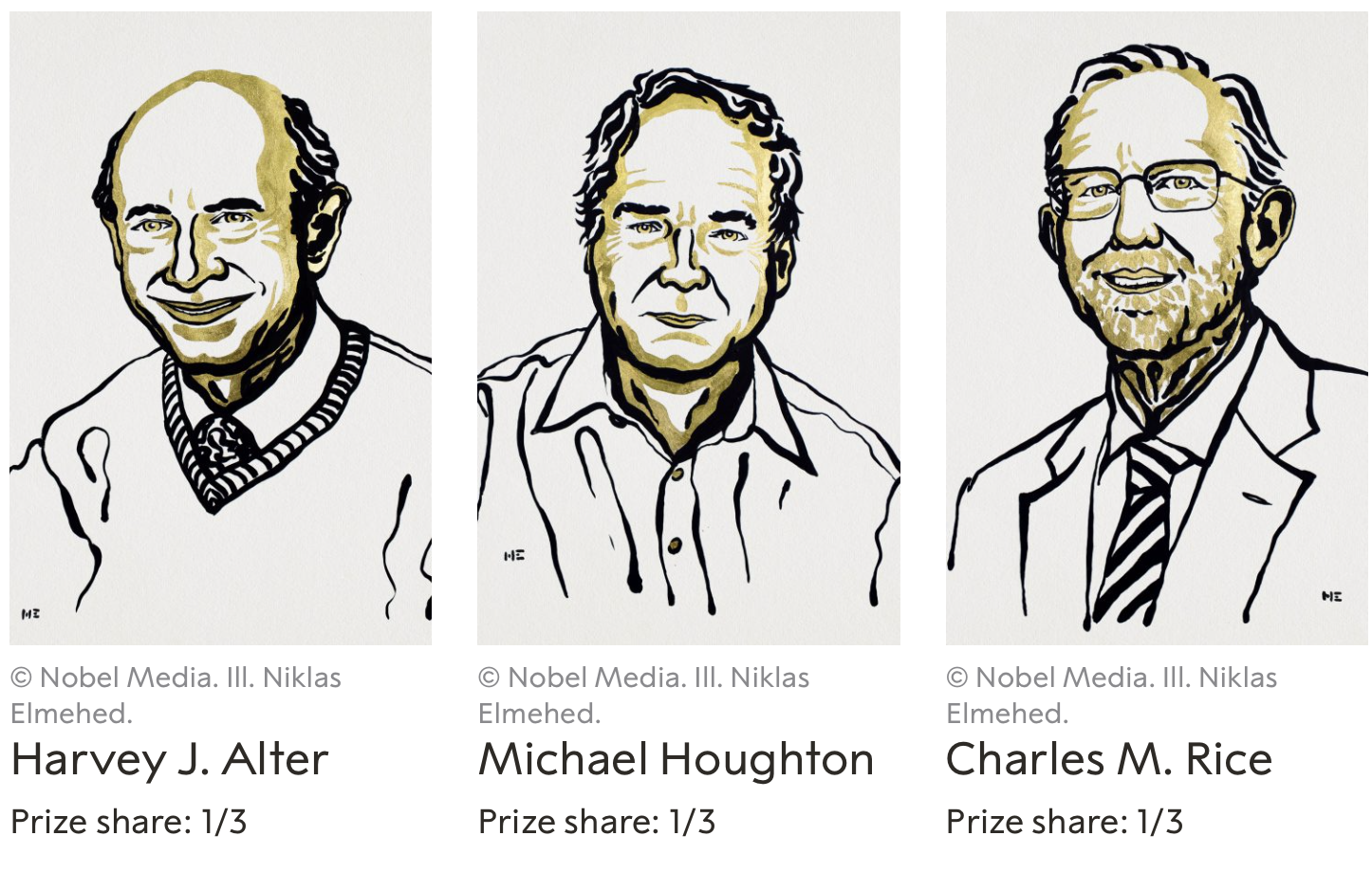 The methodical studies of transfusion-associated hepatitis by Harvey J. Alter demonstrated that an unknown virus was a common cause of chronic hepatitis. Michael Houghton used an untested strategy to isolate the genome of the new virus that was named hepatitis C virus. Charles M. Rice provided the final evidence showing that hepatitis C virus alone could cause hepatitis.

Chimpanzees were used in the research as the only animal other than man to be infected by hepatitis C.

The 1976 Nobel Prize for Physiology or Medicine had already celebrated Baruch Blumberg’s work from the 1960s partly conducted in animals and his discovery of the hepatitis B virus. But it became quickly evident that hepatitis B was not the only cause of blood-borne hepatitis and that the majority of cases remained unexplained. This was a great source of concern. Up to 30% of patients were getting sick from blood transfusions and developing chronic hepatitis from this unknown infectious agent.

Harvey J. Alter, who had previously collaborated with Blumberg, was the first to show that patients were being infected by another unknown agent - that wasn’t hepatitis A nor B - and that the blood from the patients with acute or chronic non-A, non-B hepatitis could transmit the disease to chimpanzees, the only non-human species susceptible to the infection.

The development of a primate model of infection was the crucial step in making significant progress towards the characterization of the agent as a virus, and its properties. The availability of an animal model of the disease provided the means to identify morphological changes associated with the infection of hepatocytes and the possibility to characterize the infectious agent with classical virology methods.

Alter’s methodical investigations had, in this way defined a new, distinct form of chronic viral hepatitis. The mysterious illness became known as “non-A, non-B” hepatitis until the identity of the virus was unveiled a decade later by until Michael Houghton and his colleagues at Chiron. They identified the virus using antibodies from infected humans and chimpanzees and sequenced the genetic code of what became known as hepatitis C.

The final step in the discovery came from Charles Rice who demonstrated that the virus alone could cause hepatitis in chimpanzees, explaining the remaining infections spread by blood transfusions.

But the research didn’t stop there. The discovery of the hepatitis C virus paved the way for antiviral drugs and vaccines, but only because effective in vivo as well as in vitro models were further developed. While the viral clones developed by Charles Rice were infectious in primates, they exhibited poor replicative capacity in cell lines, which hampered in vitro studies to understand the virus and find treatments. The identification of virus isolates that could replicate in cell lines with high efficiency were necessary before any major step were made possible.

The other obstacle stemmed from the restricted host spectrum of hepatitis C that only infects humans and chimpanzees, especially since today, chimpanzees are no longer used in the UK for scientific purposes. The consequent of the lack of non-primate animal models until the beginning of this century hindered the precise assessment of the pathological and immunological profile of the disease, and the pre-clinical testing of candidate drugs.

The availability of in vitro replication systems and the development of small animal models for in vivo studies were the stepping-stones for the development of highly effective antiviral drugs that have revolutionized the treatment of hepatitis C infection.

It is now possible to foresee, for the first time in human history, a future where the threat of this viral infection is removed. The risk of transmission via blood products in many parts of the world has been virtually eliminated.

Millions of lives have been saved, which make the discoveries of the hepatitis viruses among the most impactful scientific accomplishments of the 20th century. This year’s Nobel prize for Physiology or Medicine celebrates a landmark achievement in our continuing battle against viral infections.