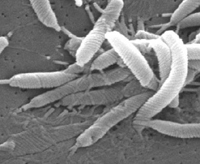 The Nobel Prize in Physiology or Medicine 2005 was awarded jointly to Barry J. Marshall and J. Robin Warren for their discovery of the bacterium Helicobacter pylori and its role in gastritis and peptic ulcer disease.
When Helicobacter pylori was discovered in 1982, the causes of peptic ulcer were considered to be stress and lifestyle. Australian pathologist Robin Warren noticed that around 50% of biopsies taken from peptic ulcer patients had colonies of particular bacteria in the antrum. A young clinical researcher, Barry Marshall, became interested in Warren’s findings and together they began an extensive study of patient biopsies. Eventually, Marshall grew a successful culture of the spiral shaped, gram negative bacterium found in the patient biopsies. The new bacterium was later designated H. pylori.