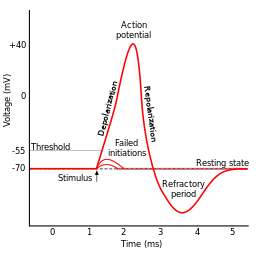 Sir Charles Sherrington’s physiological experiments, focused on the removed, he established that reflexes did not work in isolation but were an integrated feature of the whole organism.

He researched senses such as touch and the ability of animals to know the positions of their limbs, finding that animals could maintain their posture even without sensory inputs from the skin or brain.

‘Sherrington’s law of reciprocal innervation’ explains how antagonistic pairs of muscles (such as the bicep and tricep) coordinate their contraction and relaxation to allow fluid movement. He worked on many animals, often dogs and cats, generating reflexes in muscles by directly stimulating the afferent nerve, and showed that the size of the ‘twitch’ response depended on the number of motor units activated. Each of the motor units depended on the sum of many excitatory and inhibitory signals from spinal cord (efferent) neurons reaching a particular level of excitation. When the reflex caused one muscle to ‘twitch’ it also sent signals causing the antagonistic muscle to relax, allowing fine control over movement and posture.

It was known that nerves carried electrical charges. Working principally in frogs, Edgar Adrian used the new technology of a radio amplifier to investigate the tiny currents in the nerve fibres. Despite the many complex influences on the nerve fibres he found something amazing – that the size of the impulse is always the same. Whenever light fell on the retina of the eye, skin contracted or pain was felt these sensory organs gave rise to impulses in the nerve fibres which were fundamentally the same size and form. A stronger stimulus led to a more rapid stream of impulses.

Taken together, Sherrington’s and Adrian's work, fundamentally changed physiology from the understanding of posture to the senses to what happens when nerves are damaged.