The action of oxidative enzymes 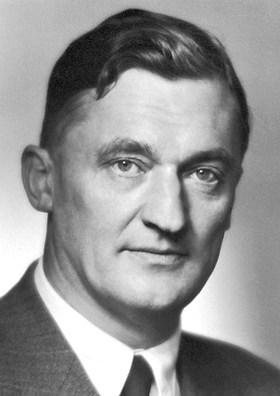 The 1955 Nobel Prize for Physiology or Medicine was awarded to Axel Hugo Theodor Theorell for his discovery of the nature and mode of action of oxidation enzymes.

Enzymes quicken dull and sluggish molecular reactions which will not spontaneously occur. They are a wide range of molecules and their numbers are still not known. Oxidative enzymes were first discovered (1933-35) by Otto Warburg, the enzyme pioneer (1). In the 1930s, there was an avid interest in oxidation and reduction reactions in living organisms, supporting the transduction of energy and the transformation of metabolites. Oxidative enzymes are responsible for the catalysis of these oxidation reactions.  Warburg made the great discovery of the splitting and recombination of the yellow enzyme(2). The colour of the yellow enzyme fades upon reduction and returns upon oxidation making it a perfect model to study the mode of action of oxidative enzymes.

Axel Theorell worked for several months in Warburg’s lab and was able to look at the yellow enzyme’s redox reaction in more detail. To do so, he developed an electrophoresis machine to separate various lipid components of the enzyme. By studying and isolating the yellow enzyme, he determined it was in fact a protein with a molecular weight of 75,000. It was the first time anyone had been able to separate an active enzyme into components – a protein and a prosthetic group or Coenzyme – that were pure. Individually each part was inactive, but when combined, the full enzymatic activity was restored.

Theorell’s chemical and physical examinations of the yellow enzyme put him at the front of research into vitamins, coenzymes and prosthetic groups. He worked in particular on studying iron containing enzymes and this involved isolating, purifying and characterizing as many different enzymes from a category as possible. Comparative studies then provided insights into their physiology, especially those with ions as coenzymes – haemoglobins, cytochromes, peroxidases, catalases. Before Theorell began his investigation, little was known about these substances that are necessary for life.

A most important part of Theorell’s work has been concerned with enzyme dynamics such as the speed of enzyme reactions and the direction in which reactions go in living organisms. These experiments are not only of basic importance but may be considered model investigations in enzymology. Theorell’s research has illuminated and clarified our understanding of several of the enzymes necessary for life.