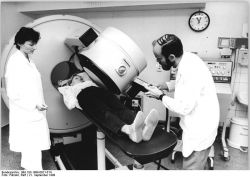 The 1979 Nobel Prize in Medicine or Physiology went to Godfrey Hounsfield and Allan Cormack, for their individual contributions to the invention of computer-assisted topography – commonly known as the CAT or CT scan. CAT scans revolutionised the ability of doctors to visualise our internal organs, and are now commonly used to research, diagnose and monitor a huge range of diseases.

Prior to the invention of the CAT scan, X-rays were the primary method doctors used to look at our organs from outside our bodies. Although useful, X-rays have significant limitations that result in low contrast images which can be difficult to interpret; they produce only a two-dimensional picture merging together all parts of the body through which the rays pass. In addition, X-ray films are not sensitive enough to pick up subtle differences between tissue types.

In the 1960s, Allan Cormack came up with a mathematical solution that he hoped would allow the reconstruction of a high-definition image of any individual slice through the body. He tested his theory using gamma-rays on various materials, including pig tissue, and found that his calculations had been correct.

Shortly after this, and completely independently from Cormack, Godfrey Hounsfield, worked on the same problem and came up with a very similar solution. Hounsfield took his vision from initial tests in bullock and pig tissue, right through to clinical trials and use in humans, and was involved in several subsequent improvements to the technique that has since proved invaluable in many areas of medicine.