The role of the genetic code in protein synthesis 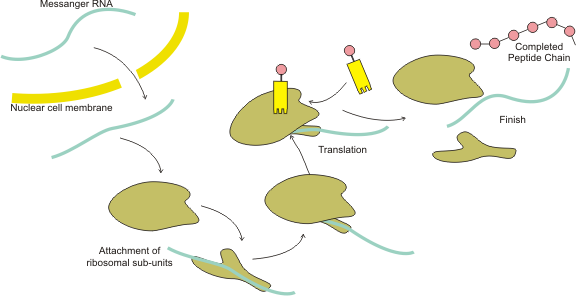 In 1968, the Nobel Prize in Physiology or Medicine was awarded jointly to Robert W. Holley, Har Gobind Khorana and Marshall W. Nirenberg for their work on the interpretation of the genetic code and its function in protein synthesis, showing how the order of nucleotides in nucleic acids, which carry the genetic code of the cell, encode the proteins synthesized by the cell . They established the biological language or genetic code common to all living organisms, is spelled out in three-letter words: each set of three nucleotides codes for a specific amino acid.

All three scientists worked independently on different aspects of breaking the genetic code. Between them, they worked out how genetic information is translated into proteins.

By 1959 it was known that genetic information was carried by DNA. However, it was not know how DNA directed the production of proteins, or what role RNA had in these processes. The three scientists showed that RNA – the intermediate molecule between DNA and proteins – could form three letter 'words' with its chemical bases A, U, C and G and that these 'words' could be translated into a sequence of amino-acids, the building blocks of proteins.

Dr Nirenberg discovered the first nucleotide 'word', a sequence of three molecules of uracil (UUU) coded for the amino acid phenylalamine. He realised very quickly that he had found the genetic code for that amino acid and went on to decipher the code for 19 other amino-acids by synthesising RNA.    Using a different technique he unlocked the code for 50 amino acids in total.

Dr Holley found the direct link between messenger RNA and proteins: transfer RNA or tRNA. tRNA brings the right amino acid to the protein synthesis machinery (ribosome), makes sure that it corresponds to an mRNA sequence and then allows the ribosome to incorporate it into the amino-acid sequence that will ultimately form a protein.1

Together, the researchers deciphered an entire biological system and by understanding how the translation between RNA and protein codes occurred – revealed one of the oldest 'codes' in the history of life.