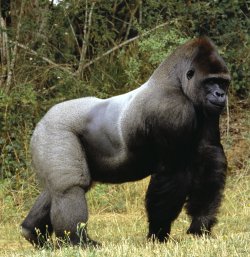 An Ebola epidemic has had a devastating impact on humans, chimps and gorillas in central Africa over the last decade. There are particular fears for western gorillas (gorilla gorilla). Although all apes and chimpanzees are threatened, these gorillas have a habitat ranging over a particularly small area, with the majority of the population found in parts of Gabon, Republic of Congo and Cameroon.

Outbreaks of Ebola have hit the large, isolated parks, which usually form the core of the gorilla conservation network. In the mid-90s more than 90% of the ape population in Minkébé Park in northern Gabon died during an Ebola outbreak. There were major deaths due to Ebola in Odzala National Park in northwest Congo from 2003 to 2005. Other smaller parks have been similarly affected, and it is estimated that a third of the world’s gorilla population living under protection in national parks have been killed in the last 15 years.

The Ebola virus causes Ebola haemorrhagic fever. Symptoms include vomiting, diarrhoea, general body pain, fever and both internal and external bleeding. The mortality rate is high: around 80% in humans and over 95% in gorillas. The cause of death is usually hypovolemic shock, where  shock is induced by a sudden loss of blood-volume, or organ failure. Illness occurs from 2 to 21 days after infection, but in most cases the time between symptom onset and death is 7 to 14 days.ANCHOR,ANCHOR

The first outbreaks of the virus occured simultaneously in Zaire (now the Democratic Repuplic of Congo) and Sudan in 1976, since then Ebola outbreaks have occurred ebruptly, then spread from person to person. The pattern of outbreaks, both in humans and non-human primates, suggests that the virus is carried by a small, abundant carrier species. Fruit bats are considered the most likely candidate,ANCHOR but despite efforts of the World Health Organisation in identifying the cause of the disease, this has not yet been shown conclusively. Outbreaks in humans are also triggered by contact with dead primates, and reducing contact between humans and wildlife may reduce the spead of the virus.ANCHOR

The cost of the disease is great. It kills many people in the areas affected, and is destroying primate populations. Many of the regions around the conservation areas rely on eco-tourism for income, and the impact on the gorilla and chimpanzee populations has a direct effect on local livelihoods.

In March 2003 an emergency meeting was held in Brazzaville, Republic of Congo to address the Ebola virus outbreak, both immediately and in the long term. This was the first multi-disciplinary gathering of experts to discuss Ebola in terms of its impact on both people and wildlife. Measures were put in place during this meeting to ease the social and economic traumas of the disease, which threatens both biodiversity and human health.ANCHOR

Over the last decade the virus has spread across equatorial Africa at a consistent rate of around 50 km per year, and it seems likely that this will continue. If the gorillas in the parks which are currently unaffected by the virus suffer the same mortality rates as those seen so far, Ebola may kill a further 15% of the world’s gorilla population over the next 10 years.

While the Ebola virus alone does not threaten apes and chimpanzees with extinction, this epidemic has reduced the population to a point where it can no longer sustain itself in the face of poaching and other pressures. Gorillas breed slowly, and it is estimated that even with optimistic reductions in disease and hunting, it would take the population 75 years to recover from its present situation.ANCHOR The World Conservation Union (IUCN) raised their status to critically endangered in September 2007. This is the first time that a mammal has become critically endangered as a direct result of disease.

As most transmission is through small carrier species, which would be difficult to control, it is unlikely that transmission can be completely prevented. However, recent studies show that once the virus has reached a population of gorillas it spreads from one to another, even moving between their social groups. In these situations a vaccination programme could be highly effective, breaking the chain of transmission. There are relatively small numbers of apes remaining in equatorial Africa to be vaccinated, and since the gorilla population is falling so quickly, even saving a few thousand in key areas would make a difference.ANCHOR 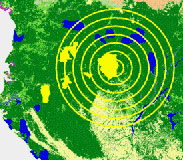 Animals tests have shown that several vaccines have protected laboratory monkeys from EbolaANCHOR,ANCHOR,ANCHOR,ANCHOR, and they are likely to also be effective in chimpanzees and gorillas. It is hoped that as well as saving western gorillas from extinction, these will also help pave the way for a human Ebola vaccine. The vaccinces are now being developed by a collaborative task force, whose objective is to tackle the ape Ebola crisis (see related links). To adapt each of these vaccines for use in apes their efficacy must be researched, and considerable safety testing is needed. Captive and field studies will be used to determine the best delivery methods for the vaccine. The two possible delivery methods available are intramuscular injection by darts, or an oral vaccine delivered by baiting.

Oral vaccines have controlled rabies across Europe, and are presently being developed as part of a successful vaccination programme to save the endangered Ethiopian wolf.ANCHOR Similar baiting programmes could reach a large number of gorillas, but require research to find a successful bait, which is attractive to only the target species. Oral delivery methods involve live vaccines, and so need extensive testing before they can be introduced to wild populations.

There are fewer safety concerns over darted delivery methods, as the vaccines are not live forms of the disease. The darted vaccines will be available quickly as they need less rigorous testing, but far fewer gorillas can be immunised this way. A successful vaccination programme will require development of both delivery methods. These could be used both to control transmission in affected areas, and immediately ahead of the epidemic wave.

It is hoped that the recent findings concerning the spread of Ebola, and the ‘critically endangered’ status of western gorillas will bring the funds needed to complete the testing of an effective vaccine, and to research suitable delivery methods. The current cost of field and laboratory testing required to launch a successful vaccination programme is currently estimated by the IUCN to be around $2m.