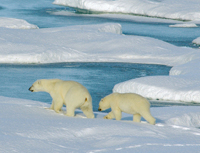 Ecological toxicology is concerned with the concerned with persistent bioaccumulation, which describes chemicals that are not easily broken down and build up in the environment over time. These substances can be particularly damaging to carnivores which are at the top of the food chain, and are a serious concern for environmental groups.

Environmental hazards posed by a substance are assessed according to three factors:

In deciding whether a substance poses a threat to the environment regulatory organisations need to consider the overall level of exposure. Concerns over a substance are usually identified through epidemiology and wildlife studies. Once the risks are understood further tests such in vitro studies on cells or reproductive studies on animals are considered.

A risk-benefit analysis is used to protect the environment from harmful substances while allowing material and chemical technologies to be used effectively and developed. Animal tests are used to understand the potential damage that may be caused by a particular substance, to show how a hazard can be controlled or to develop alternatives to a harmful chemical. Algae, daphnia and fish are the most commonly used organisms for environmental toxicity tests, while further tests on other animals may be carried out if necessary.

There is a risk that if substances are not broken down they may travel up the food chain, so predators can accumulate large amounts of a particular chemical in their blood when they eat contaminated food. This means that the hazard might be greater to higher animals which are further up the food chain.

Many studies look at the risk of a substance accumulating in the food chain and weigh this against the benefits associated with its use. Birds, such as quails, are often used to study the effects of chemicals on the food chain. The particular species used often represent the native species in the environment being investigated. For example, the Japanese quail is often used to study products used in Japan, whilst the Bob White Quail, which is native to North America, is generally used to test products which are manufactured in the USA. Birds are also convenient for reproductive studies, so the effects of chemicals on development and on successive generations of animals can be investigated.

The disaster at Minamata showed the consequences of environmental pollution and paved the way for protective legislation. Minamata disease was identified in 1956 following many similar incidences nervous system damage in the area local to the Japanese city of Minamata. Pollution was officially recognised to be the cause of the illness in 1968.

Minamata disease was caused by a methyl mercury compound produced by the Chisso Minamata factory. The factory began production of vinyl chloride in 1941, but the official report confirming that chemicals produced by the factory had entered the food chain through the water supply, was not issued by the Japanese government until 27 years later. Since the mercury could not be broken down by the body people who ate fish or shellfish from the Minamata river suffered toxic effects of mercury poisoning.

Since 1968 bioaccumulation and environmental toxicity have been serious concerns governing the regulation of chemical use and testing in Japan. Fish in Minamata Bay were declared safe in 1997, and legislation has been introduced to ensure the prevention of similar disasters. Increased awareness of environmental issues is now leading to the introduction of worldwide regulations and safeguards.

Fluorinated polymers are water resistant compounds are used in many different chemical products such as grease-proof food packaging, paints and sealants, stain-free carpets and screen-wash fluid. When they degrade chemicals belonging to the PFCA and PFO groups are formed. These cannot be broken down further by bacteria, so they persist in the environment, and are likely to remain in soil for hundreds of years.

A team at the University of Toronto led investigations into the prevalence and effects of these chemicals, finding that PFCAs and PFOs are now present in human blood and household dust. There were greater concerns when larger concentrations were discovered in the blood of Arctic mammals such as seals and polar bears, far from any possible source of industrial pollution. These concentrations appeared to be increasing rapidly.

Animal tests have linked PFCAs to cancer and other developmental defects, and they are considered likely to also cause cancer in humans. However, while the possibility of human cancers being caused by these agents presents a hazard, the present risk is thought to be low. The primary cause of concern is that PFCAs  appear to be accumulating in the Arctic, far away from any source of chemical pollution. Recent investigations are looking into the effects of these chemicals on rats and fish, while studying how they accumulate in seals and other higher animals.

The researchers are trying to understand how these chemicals move in the environment, and how this leads their accumulation in these remote regions. Since fluorinated polymers have been used since the 1950s an important aspect of this work has been to estimate the total quantity of PFCAs that have been released into the environment. Early assessments showed that the main environmental ‘sink’ for PFO and probably of most other PFCAs, was water which carried them to distant regions in rivers, streams and lakes. The research showed that most PFCAs in the environment came directly from the use of chemical products. The breakdown of chemicals into PFCAs appeared to make a smaller, but still important, contribution to pollution.

PFCAs are now believed to be carried by both air and water. There is now a focus on reducing emissions of these chemicals during manufacturing processes, and on preventing the release of their precursors into the environment.

The concerns raised by the accumulation of these pollutants in the environment have led to the development of new materials to replace them. Some fluorinated polymer-based products (such as flourotelomers) are not regarded as hazardous and do not appear to have similar toxic effects on the environment. Animal studies are used to verify that they do not metabolise to PFCAs or PFOs, that they are not mutagenic, and that they represent lower risk to the environment.

Endocrine disruption is a potentially serious side effect of chemicals, but there is little call for risk assessment in this area, largely because the science is not sufficiently developed to provide screening tests. Screening of some target chemicals is carried out in the EU (overseen by the endocrine disruption regulation group which works on this problem), but the available tests are currently limited. Under REACH legislation it is usually the responsibility of manufacturers to decide whether chemicals might be endocrine disruptors, but substances already classified as toxic to the reproductive or endocrine systems may be considered ‘substances of very high concern’, and would need to be tested for these effects to see how they are caused and how they might be prevented.

One way to study effects on the endocrine system is to use reproductive toxicology studies, in which a group of animals are exposed to a chemical before or during pregnancy. Effects of the substance on their ability to reproduce and on successive generations of offspring are studied. However, while these studies may indicate that a chemical has an effect on reproductive hormones, they do not show what the effect is. These tests have recently led to the classification of borates as toxic to reproduction by the European Commission.

Some assays for endocrine toxicity have been considered recently by the US EPA. Their assessment is currently delayed but is to be rescheduled.