Naked mole-rats (Heterocephalus glaber) are one of the most bizarre mammals known to science. They have almost no hair, hence their name, and have large protruding incisors. The teeth are an adaptation to living underground and are a key tool for tunnelling through the soil and carrying food around their colonies, which on average consist of 80 animals. Naked mole-rat colonies are usually headed by a single breeding female who dominates the colony, the queen, who breeds with 1–3 males. This social system is highly unusual in mammals, but is similar to that commonly observed in bees and termites and is termed eusocialANCHOR. However, the naked mole-rat queen appears to use physical man-management to maintain dominance (so-called shoving behaviour), rather than the pheromones used by bees and termitesANCHOR ANCHOR.

In addition to being eusocial, naked mole-rats are essentially cold-blooded (in that they cannot regulate their body temperature), long-lived, adapted to high carbon dioxide/low oxygen and do not develop cancerANCHOR. Such unusual organisms are often termed extremophiles and science has a history of making ground-breaking discoveries by studying such organisms, e.g. the extraction of Taq polymerase from the bacterium Thermus aquaticus, which thrives at 70°CANCHOR, an enzyme now used routinely in experiments in laboratories worldwide to amplify DNA. 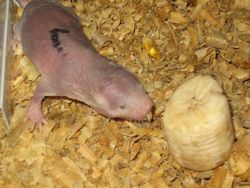 Body mass is usually a good predictor of a species’ maximum life span but naked mole-rats break the trend. They are a similar size to mice and yet mice rarely live longer than 3.5 years (as their body mass predicts), while naked mole-rats live up to 30 yearsANCHOR.

It is still unclear how naked mole-rats are able to live such long and healthy lives, but they have been used for a model to examine several theories about how aging occurs. For example, one theory suggests that exposure to reactive oxygen species causes damage that results in aging and that organisms living an exceptionally long time must either generate lower levels of reactive oxygen species and/or have particularly efficient anti-oxidant mechanisms. In naked mole-rats neither lower levels of reactive oxygen species are presentANCHOR, nor do anti-oxidant levels appear significantly raisedANCHOR. Despite this, phospholipids (a type of fat that is a key constituent of cell membranes) are less damaged by oxidation in naked mole-rats compared to shorter-lived rodentsANCHOR. In addition, naked mole-rats appear better at maintaining the quality and stability of proteins than miceANCHOR and they are remarkably resistant to cancer (see below). It is possible that these are all factors that may contribute towards the longer life span of naked mole-rats.

The exceptionally long life-span of the naked mole-rat therefore makes this species a highly suitable model for studying aging processes, especially the physiological changes that occur in elderly animals, which may help us understand more about the mechanisms underlying ageing in humans.

Resistance to hypoxia and hypercapnia

Animals with a subterranean lifestyle have to cope with both low oxygen levels (hypoxia) and raised carbon dioxide levels (hypercapnia). Naked mole-rats have a form of haemoglobin with an exceptionally high ability to collect oxygen and so provide enough oxygen to the body’s organsANCHOR.

Naked mole-rat brains are remarkably resistant to hypoxia and maintain neurotransmission for much longer than mice during bouts of low oxygen levelsANCHOR. Hypoxia commonly occurs during strokes and thus studying mechanisms underlying how the naked mole-rat copes with hypoxia may lead a better understanding of how to treat stroke-related damage.

One potential consequence of living in hypercapnia is tissue acidification. This is because carbon dioxide generates carbonic acid upon contact with water in the body. Whereas humans find acid painful (think of spilling lemon juice or vinegar into cut skin while cooking) and mice briefly lick their paw after receiving an injection of acidic saline solution, naked mole-rats show no aversive reaction to acidic saline, although they do show comparable withdrawal responses to mice  when tested for heat and pressure sensitivityANCHOR.

Scientists have identified changes in the amino acid sequence of a voltage-gated sodium channel protein, NaV1.7, which is crucial for transmission of electric signals in pain-sensing nerves. These changes in the naked mole-rat NaV1.7 makes it more negatively charged. This makes it strongly attract the positively charged hydrogen ions from the acid, which block NaV1.7 from functioning. Consequently, acid acts like an anaesthetic, rather than a stimulus and hence naked mole-rats do not lick their paws in response to a small injection of acidANCHOR.

The identification of NaV1.7 in this role was a key finding in understanding the molecular mechanisms by which acid evokes pain and may have major implications in terms of drug development. This is because the ability of acid to evoke pain in humans is more serious than just a spill of lemon juice into a cut: tissue acidosis is a hallmark of painful inflammatory conditions such as rheumatoid arthritis. Therefore, these findings may help in the design of drugs that can be used to block NaV1.7 and reduce pain.

Changes in a different voltage-gated sodium channel (NaV1.8) has since been shown to make the grasshopper mouse (Onychomys torridus) resistant to the pain-inducing venom of the bark scorpion (Centruroides sculpturatus), allowing the mice to prey on the scorpionsANCHOR. NaV1.8 is specifically produced in pain-sensing neurones and understanding how the scorpion venom binds to and inhibits NaV1.8 may aid the development of NaV1.8 inhibitors. This study, combined with on-going research on the naked mole-rat, demonstrates what can be learned from studying unusual animals. 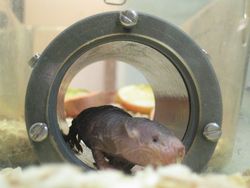 One likely factor underlying the longevity of naked mole-rats is their resistance to cancer. Over a period of 15 years in a study of animals housed Brookfield Zoo, none of the 138 naked mole-rats that died of natural causes were observed to have developed cancerANCHOR. By contrast, approximately one in three humans develop cancer during their lives, a frequency that is likely to increase as humans live longerANCHOR. Recent findings suggest that naked mole-rat cells produce a long-chained sugar called hyaluronan, which appears to render naked mole-rat cells resistant to changes that make a normal cell cancerousANCHOR. Interestingly, this same protein may increase the suppleness of naked mole-rat skin to help deal with living a life in tunnels.

With so many unusual traits, science can learn a lot from naked mole-rats and findings could have a wide array of positive impact on the treatment of disease in both non-human animals and humans.