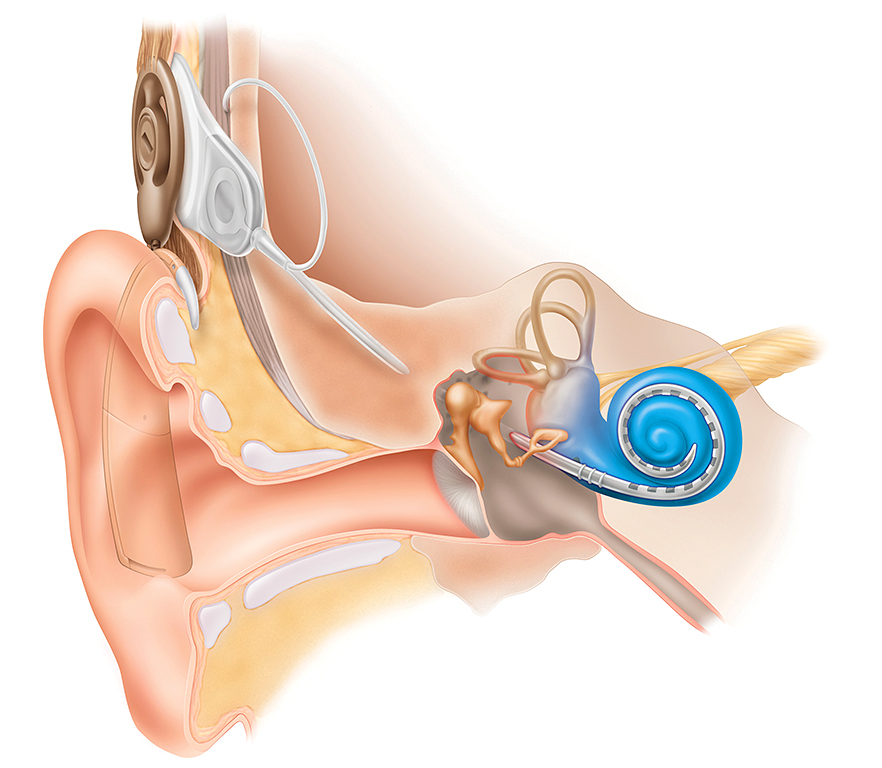 360 million people worldwide have disabling hearing lossANCHOR. This can be brought on by a variety of causes including birth complications, meningitis, ear infections, exposure to excessive noise and ageing. Currently most cases cannot be treated, but there are several upcoming treatments that have shown success in animal experiments.

There are several components to the ear that can result in hearing loss if damaged. This includes the hair-like ear cells that vibrate and pick up sound, and the nerves that transmit the signal to the brain. These cells cannot be repaired by the body if damaged and even medical interventions can only repair a minority of casesANCHOR ANCHOR. Vaccines have helped to reduce the number of cases caused by infectious diseases; however there are still many cases caused by excessive noise, ageing and genetic conditions.

Gerbils and guinea pigs have a similar hearing range to humans which makes them a useful model for understanding how our ears work and how they can be repaired. Georg von Békésy won the Nobel Prize in physiology or medicine in 1961 for developing through animal testing our understanding of how the inner ear worksANCHOR. His studies focussed on the cochleas of guinea pigs, which helped him to understand how the ear distinguishes between different pitches.

Birds and fish, unlike mammals, are capable of regenerating sound-sensing hair cellsANCHOR. Studies have shown that the zebrafish uses a growth hormone to repair its ear cells after damageANCHOR. This knowledge acquired through animal experiments could provide a new avenue of research for new treatments of hearing loss.

At the moment there is no way to reverse 80% of hearing loss cases, however being able to replace hair cells could allow most of these to be treatedANCHOR. There are a number of different ways that this could be achieved and trials on animals have shown great promise.

Researchers at Harvard Medical School have developed a drug that allows hair cells to be regenerated. By inhibiting a protein known as Notch, the drug causes supporting cells around the damaged hair cells to become new hair cells themselvesANCHOR. In January 2013, they reported that mice with noise-induced hearing loss were able to replace their lost hair cells within three months after being given the drug.

A similar improvement has also been achieved in guinea pigs through gene therapy, where new hair cells were produced and damage to existing hair cells was repairedANCHOR ANCHOR. This led to a complete recovery in their hearing after not being able to hear anything quieter than a chainsaw.

In mice, gene therapy has been used to target numerous rare genetic defects that can cause deafness from birthANCHOR. In February 2013, researchers were able to recover hearing in a mouse model of Usher syndrome, which affects 1 in 6000 people and is the leading cause of combined deafness and blindnessANCHOR.

Stem cells could also provide a method for repairing damaged ears. Human stem cells were converted into nerve cells that were injected into gerbils with hearing lossANCHOR. The gerbils’ hearing abilities were measured by electrical activity in the brain, which showed marked improvement. This technique could one day be used to treat auditory neuropathy in humans, which causes 15% of hearing problems. The success of this could also lead to stem cells being used to replace damaged hair cells.

While these treatments may be some years away from being used in humans, our current therapies have their roots in animal research. Cochlear implants are used to stimulate the auditory nerve in people who are severely hard of hearing or profoundly deaf. Its history began in the 18th century when Alessandro Volta first discovered that placing electrodes in his ears connected to a battery caused him to hear a sound of thick soup boilingANCHOR. However, the field did not progress until the 1930s when Wever and Bray discovered that the electrical response from a cat’s auditory nerve resembled the frequency of the noises heard by the cat. This led to an operation in 1957 where a signal generator was clamped to the exposed auditory nerve of a patient during surgery who was then able to distinguish between certain words and hear differences in pitch.

In this video, Dr Paul Potter explains how GM mice have been used to understand the basis of glue ear.