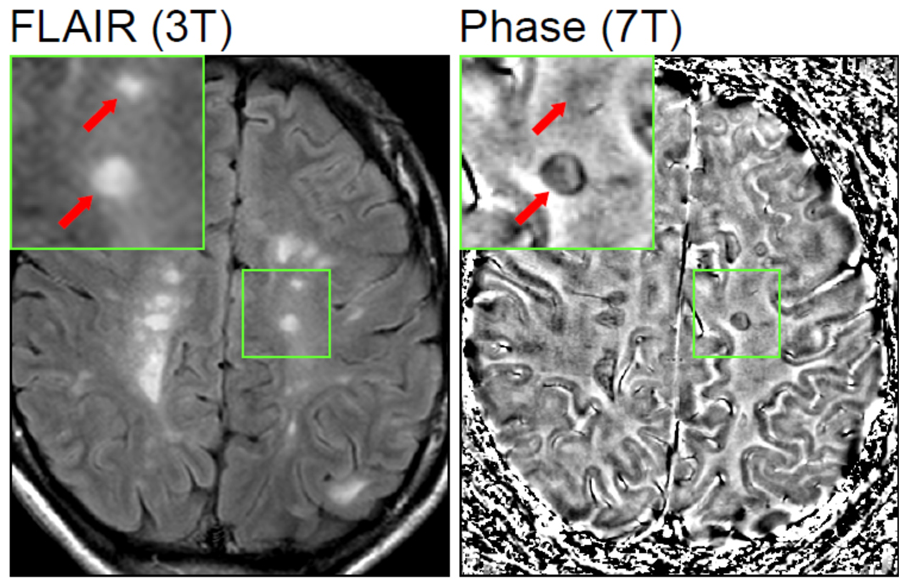 Multiple sclerosis (MS) is caused by the destruction of oligodendrocytes, which produce the myelin sheath surrounding the axons of neurons in the Central Nervous System (CNS), by the cells of the immune system. This autoimmune disease affects about 85,000 people in the UK and a million people worldwide, making it the most common disabling neurological disorder currently affecting young adults.

In MS the white cells of a person’s immune system wrongfully attack and destroy normal cells of the body. They are able to cross the protective blood-brain barrier, and attack the protective fatty sheaths of the  brain's neurons. The destruction of the fat layers causes incorrect transmission of nerve impulses between neurons, which manifest as physical symptoms of fatigue, muscle weakness and spasms, difficulties with eyesight, speech, and swallowing, and depression. Sufferers usually begin by entering a relapsing-remitting phase of 10-15 years, during which they experience periods of symptoms followed by apparent recovery. However, as the disease progresses into the secondary and primary phase, the individual experiences worsening symptoms with no remission. Currently, there is no cure.

To develop treatments for MS, researchers use a mouse model of the disease. Experimental autoimmune encephalomyelitis (EAE) mice, first described 50 years ago as a highly important model of inflammatory CNS autoimmune disease. Using this model, researchers can produce acute, chronic, and relapsing-remitting EAE models to trial MS treatment. The model also allows the nature of the disease to be studied. Like other autoimmune diseases, it is thought that MS can be induced by a viral infection. This theory has been supported by animal studies, and makes the EAE model especially suitable as the condition caused by a virus. Revealing the cause of the disease may help us to understand its transmission and early development, as well as improving the efficacy of treatment.

An emerging potential treatment removes the ‘self-reactive’ lymphocytes, replacing them with lymphocytes developed from the patient’s own stem cells. In effect, this is a recalibration of the person’s immune system which removes the abnormal aspects and transplants their own immune cells back into the body. Because the replenishing white cells are developed from the patient’s own stem cells, they do not induce the usual problems of rejection.

In a recent study published in the Lancet, researchers recruited 21 sufferers in the relapsing-remitting phase of MS who had not responded to traditional treatment. They used a low-intensity treatment to remove the patients’ self-reactive white cells. New white cells were developed from stem cells taken from the patient’s own bone marrow, and transplanted back into the body. After an average period of 3 years, 81% of patients showed improvement of physical disabilities, and 100% showed disease stabilisation.ANCHOR

The use of  HSCT to treat autoimmune disorders was first considered following observations of autoimmune disease remission when bone marrow tissue was destroyed during cancer therapy. Researchers found that bone marrow transplants could induce either resistance or susceptibility to autoimmune diseases, and realised that the bone marrow cells were key to the development of such diseases. However, the destruction of bone marrow was an aggressive treatment regime which severely depleted the patient’s immune system. Using the animal model, researchers were able to conclude that bone marrow transplants were a viable treatment for MS, but that severe depletion of lymphocytes also raised the mortality risk.ANCHOR These results led to the development of less aggressive conditioning regimes which would be safer for human patients.

Comparing animal and human study results has revealed that human autoimmune diseases are caused by multiple underlying factors. Animal models have shown genetic factors to be strongly influential, whereas in humans, it is suggested that environmental factors may be key to the development of the disease. Researchers are also using animal models to further investigate whether the source of the HSCT should be the individual concerned, or a donor.ANCHOR

Future research will focus on assessing the latest breakthrough treatment further in a larger, randomized study of 100 human volunteers, and the intensity of the immunosuppresstion required to reduce risks of secondary infections. Professor Richard Burt, the leader of the study, said this treatment was not a cure, but a way of "changing the natural history of the disease", while Dr Doug Brown, Research Manager at the MS Society, hailed the results as ‘encouraging’ and said- “Stem cells are showing more and more potential in the treatment of MS and the challenge we now face is proving their effectiveness in trials involving large numbers of people.”.ANCHOR

Harnessing the body's own mechanisms

Fibrin, a protein that helps form blood clots, may inhibit the repair of damaged nerves. Previous research has shown that fibrin accumulates in the damaged nerves of MS patients, but research in mice has now shown that fibrin-free mice regenerate myelin faster than normal mice after damage to the sciatic nerve in the legANCHOR. In 2004 researchers found that EAE mice that were bred without fibrin showed a later disease onset and lived longer that normal EAE miceANCHOR.

Researchers found that EAE mice had a more severe form of the disease if they lacked a chemical messenger known as CNTF. They proposed that CNTF protects special nerve cells called oligodendrocytes against programmed cell death through a mechanism that involves a substance called tumour necrosis factor alpha (TNF-α)ANCHOR ANCHOR. Other scientists found that administration of another messenger, LIF, can reverse this loss of oligodendrocytes normally seen in EAE. This compound is well-tolerated in humansANCHOR.

Paradoxically, MS does not respond to TNF-α, and it has now been shown that TNF-α has two opposite effects in mice, first accelerating damage to nerves and  later accelerating its repair. This finding may help the development of more effective treatments for the disease. In MS, cells have some capacity for self-repair, so a promising treatment approach is to increase the body’s ability to repair itselfANCHOR.

In 2004 scientists reported that inhibiting a protein called Nogo A in EAE mice significantly delays the onset of the conditionANCHOR ANCHOR ANCHOR. It may therefore play a role in the human disease.

Two immune proteins found in mouse brains raise the possibility that autoimmune diseases such as MS may be the result of a misguided attack by the immune system on the nerve cells that carry 'genetic fingerprints'ANCHOR. Such attacks are carried out by subset of white blood cells called T cells.

A specially engineered CD28 molecule blocks interactions between immune-system and suppresses EAE disease in mice. It interferes with the interaction that prompts T-cells to attack nerve cells in MSANCHOR. Researchers have found a way of using normal T-cells to recognise misdirected T-cells in EAE mice. Mice treated in this way survived, whereas 50% of the untreated EAE mice diedANCHOR.

In MS, T-cells in the immune system are stimulated to attack myelin sheaths when they are exposed to small amounts of myelin protein, while T-cells exposed to large amounts of the same protein will self-destruct. This has led to the development of immunological therapy, which has been tested successfully in marmosetsANCHOR. T-cells are, however, essential to survival, so researchers have devised a way to eliminate only those T-cells that are causing the problem. A molecule that targets a specific type of T cell delivers a toxic drug called doxorubicin. This might prove useful in several autoimmune diseasesANCHOR.

Mice play a key role in allowing understanding of the genetic component of MSANCHOR. A gene in mice, similar to a corresponding human gene, has been shown to be important in making myelin, and the events that lead the immune system to destroy myelin are being worked out by studying miceANCHOR. Understanding how myelin is made and destroyed and how it can be replaced when lost may lead to effective therapies.

A critical gene, osteopontin, is a key factor in the inflammatory immune response and may determine the cycle of relapses and remissions. In rodents, disease severity is proportional to the amount of osteopontin gene expression. Osteopontin-deficient mice have milder disease and more frequent remission. The findings could lead to targeted new therapies for MS. However, more research is needed, especially as other genes are involved in the diseaseANCHOR. Indeed, when researchers analysed brain tissue from four MS patients, they found that the expression of 39 genes was increased, and the expression of 49 other genes was decreased. They selected two of these genes for therapeutic testing in mice with EAE, and found that the disease was less severe in mice deficient in the antibody receptor Fc, and that a naturally-occurring substance called G-CSF improved the conditionANCHOR.

Two genes, known as Olig1 and Olig2, control the development of cells that the central nervous system uses to generate muscle movement. Mice bred to lack one or both Olig genes failed to develop the motor nerves needed to control muscle movement and were completely paralysed. Olig genes induce oligodendrocytes to surround and protect the nerves with myelinANCHOR.

In 1994 antibodies targeting immune system cells were shown to halt the development of disease in mice with EAE6. Because these antibodies were of mouse origin they could not be used in human patients without causing an immune response. This problem was overcome by using humanised antibodies, and led to the development of a promising drug treatment for MS. Tysabri is a recombinant, humanised IgG4k monoclonal antibody produced in murine myeloma cells. It has been licensed in the UK and the US for rapidly evolving, severe, relapsing remitting MS, and is the only drug which has been shown to slow the progression of the disease over two years, although its long-term effects are still unknown.
MS patients have toxic levels of glutamate in their spinal fluid. Glutamate can cause extensive brain damage following stroke. Two studies have shown that compounds that block glutamate, which were being tested as stroke treatments, also protected rats and mice with EAEANCHOR ANCHOR. Similar compounds may prove useful in the treatment of MS.

Two anti-diabetic drugs called TZDs, already approved in the USA for treatment of Type 2 diabetes, prevented MS in mice and treated those already ill. There have already been small scale successful trials of one of these, pioglitazone, in humans. Even if the drugs are only as good as those currently in use, they still offer an advantage because they can be taken orallyANCHOR.

Many MS patients are adamant that cannabis relieves their tremors and muscle spasms, and research in mice confirms this. When EAE mice were injected with cannabis extracts, these symptoms improved within minutes and did not return for hours. The researchers found that the cannabis stimulated certain receptors on the surface of motor nerve cells and did not have a sedative effectANCHOR.